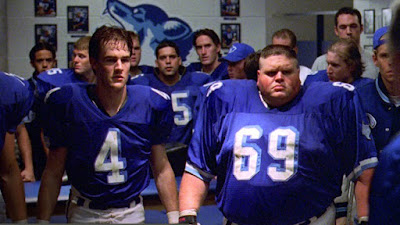 We are at the point where we have seen many sports movies, but I tend to like at least most of them. It just seems like I can never get tired of a good underdog story. Varsity Blues is a movie that I did enjoy quite a bit despite it not being good at all.

Varsity Blues comes from Brian Robbins whose previous directorial effort was Good Burger and following that he gave us some great efforts with Norbit and the Tim Allen remake of The Shaggy Dog. We you look back on his filmography Varsity Blues is probably his best film. It really is just a mix of a high school football story with the teen comedies of that era. Its got some goofy gross out moments, but then in the third act it tries to get serious when the championship is on the line.

James Van Der Beek and his pretty terrible southern accent lead this film. Van Der Beek's character Jonathan "Mox" Moxon serves as the back-up quarterback on the high school football team in a town where football is everything. He seems far more interested in pursuing academics than he is football. He's got a sassy southern girlfriend in Jules (Amy Smart, who I always like) and seems to be a good dude who is just well liked by everyone. When the star quarterback (Paul Walker) goes down with the knee injury and his season is ruined Mox is forced to step in. He instantly becomes "small town famous" and gets far more attention than he is used to or even wants.

Apart from the accent Van Der Beek is completely capable in the lead. This isn't exactly a film that is stacked with great performances and it didn't really need to be. Several of the actors were leaning closer to 30 than they were to 20 and were still playing high schoolers. Robbins seems to be more concerned with goofy characters that aren't grounded in reality at all. We get the huge linebacker in Ron Lester's Billy Bob who likes to dip his waffles in peanut butter and drink syrup straight from the bottle. Then there is Scott Caan at his most Scott Caan. These football player are able to steal cop cars and reek havoc without even a slap on the wrist.

Jon Voight is probably the strongest performance in the movie but his character could be the most ridiculous. Voight plays the head coach of the team whose success has made him a legend. All that matters to him is his next championship and he is basically the personification of the NFL. As long as he wins he doesn't care how many careers and lives are ruined by his decisions. He ends up playing a villain that never felt necessary at all and none of his players respect him. Paul Walker's quarterback could've easily become a villain as well, but his character seemed to have a heart of gold and was  more than willing to support his successor despite being limited to the sidelines. There is even a point were Walker's girlfriend tries to switch to the fresh meat and either he doesn't find out about it or simply doesn't care.

Varsity Blues is definitely best suited for an audience of teens. Its starting to show its age. There is a Scott Caan date rape joke that would probably never fly today. In the end its completely watchable sports entertainment, but its not good. Its available on Netflix now, or at least Canadian Netflix and I'm sure it'll make a completely enjoyable Sunday afternoon watch.