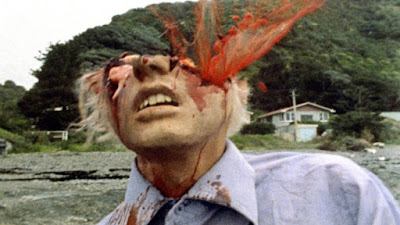 Very few people can brag about the career path that Peter Jackson has taken. He went from an independent horror director to one of the most creditable directors in the world. Watching Bad Taste and realizing this is the man behind The Hobbit, Lord of the Rings and King Kong. Its almost too amazing to be believed. There are some parts of me that long for Jackson to return to the horror comedy genre someday, but it really looks like that will probably never happen.

Bad Taste is a movie that really makes me question your accomplishments in life. It forces you to look back on your excuses for mediocrity or your reluctance to attempt things because of fear of failure. Then on top of everything it makes you want to be a filmmaker. In a lot of ways it reminds me of Clerks for that reason. Its so competent despite being such an underdog.

In order for me to explain why Bad Taste is so awesome I may need to tell you a bit of background information on the film. Peter Jackson worked on this project for 4 years on weekends while he worked at his normal full time job through the week. The cast and crew behind the film are virtually all of Jackson's friends. There was supposedly never a script for the movie Jackson just added more ideas as inspiration struck during the work week. Eventually the New Zealand Film Commission caught word of Jackson's work and invested more money into the project in order to complete the the film. During the editing process Jackson often stitched together shots that were taken years apart because production took place over such a long period.

The movie itself is critically low on story. If you look at the plot its basically just something to keep at the back of your mind while you watch the movie. Essentially its humans vs. aliens and that's all you really need to know. The plot claims that this alien race has reached Earth and they look to turn the humans into their own version of fast food. A group of 4 men are dispatched to stop the aliens before its too late.

Jackson's work in this movie is heavily inspired by some of the artists of that time. The awesome over the top gore is noticeably a nod to the very influential Tom Savini and Bad Taste is basically Peter Jackson's Evil Dead. The trademark Sam Raimi humor is there and it could be argued that Jackson's effort delve even further into insanity than Raimi did with his debut.

I probably would've never realized that the main hero of the film, Derek was actually played by Jackson himself. Its one of two roles that Jackson handles in the film. After a fight with an alien that was played by Jackson as well Derek has a long fall down a cliff that nearly kills him and leaves a hole in the back of his skull that basically opens and shuts like a wallet. The dazed and confused Derek survives and repeatedly makes an effort to keep his brain protected while he tries to help his friends.

To me, this isn't really a scary movie, but the effects are pretty effective. The genre that I found most definitive over the course of the film was the comedy. This 30 year old movie really does have some great laughs. Most of them coming at the expense of Jackson's Derek. At first glance you could consider some of the humor to be quite juvenile, but a lot of it are gags that I've never seen in a movie before.

The final showdown between humans and aliens reaches a much higher peak that I expected. There are even some fairly effective explosions that I wasn't really expecting. It has a climax that feels quite like a big budget blockbuster. I'm really glad that I heard so many great things about this movie and it led to me try it. I suggest giving it a look yourself if you haven't because I'm going to come back to this.