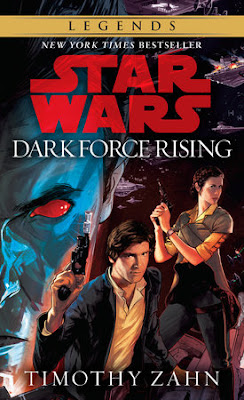 As you can see with some of my recent activity I've recaptured some of my love for reading these days. I've been burning through a book every couple of weeks. Star Wars is always a topic that I'm interested in reading about, but there is a bit of a dry spot in the canon right now, so I decided that it may be time to explore some Legends (former EU) material. I did read Heir to the Empire a couple of years ago, actually through an audiobook and now I decided to move on to the next step with the sequel Dark Force Rising which is also written by Timothy Zahn.

I enjoyed The Last Jedi a lot, but I feel like it was that movie that motivated me into exploring Legends again. Most of the Legends stuff I read was kid's novels set in the prequel era, but now I'm a little bit more interested in what happened in the EU universe after the conclusion of Return of the Jedi where Leia became a Jedi, Luke got married and Chewbacca died. Its sort of a "what if" scenario. The Legends material focuses on the power trio of Han, Luke and Leia almost solely. Then the other main characters are often their relatives. There currently aren't a lot of novels that feature all three stars of the Original Trilogy in the new canon because they likely want to save those huge moments for the films. Luke has been especially sheltered in the books in the current canon so far. I just hope that will change now that Luke's story was told in The Last Jedi.

When I read/heard Heir to the Empire I enjoyed it quite a bit, but I also didn't think it was a complete homerun either. Maybe all the years of people praising this this trilogy gave me unnaturally high expectations for it. Dark Force Rising is more of the same, although it may be actually a bit of an improvement over the first book. Timothy Zahn is able to build a pretty complex story in this book that balances perspectives from several different characters. There's a very good balance of new characters and classic characters and its probably even considered an improvement over the first book.

Dark Force Rising starts off very closely to where Heir to the Empire left off. Its roughly 5 years after Return of the Jedi. Grand Admiral Thrawn is coming off a loss against the Rebellion where the Empire attempted to steal some of their ships. Han Solo has seen Thrawn and tells the New Republic that the man behind the Empire is a Grand Admiral. In the last book Thrawn established an unstable relationship with an long forgotten Jedi named Jorus C'boath who learns that Princess Leia is pregnant with twins that will almost certainly have the potential to become future Jedi and he hopes to seduce the Skywalker family in order to train the young twins, but C'boath's isolation seems to have driven him insane, and possibly to the dark side. Then resting between the middle of the war between the New Republic and Empire is Talon Karde and his second in command Mara Jade. All three parties become aware of a secret fleet of starships that have the power to give each side a significant advantage in the conflict if they fall into their hands.

This book establishes, perhaps better than the first novel that both sides of this conflict are walking on eggshells. The New Republic is still trying to formulize and one member of the organization seems to have created a lot of paranoia. Then you have Thrawn's Empire who is trending upward after 5 years of being pushed around.

The Thrawn trilogy succeeds because Timothy Zahn is able to create a very different story while also progressing the characters very naturally in the five years since the events of the last film. In a lot of ways the classic characters have the same struggles that they have had in the original trilogy. Luke Skywalker is now a Jedi Knight, but he still lacks the knowledge that is essential to begin building his own order. When he does meet Jorus C'boath in this book it becomes very obvious that he still has a lot to learn and he's still very naïve. He's still only met 2 Jedi at this point in his life so he's still not entirely sure how a Jedi is supposed to act. I'm sure we learn that Luke grows stronger as the universe post-Return of the Jedi continues to build, but in the time of this story his abilities seem to have plateaued a bit without the guidance of Obi Wan or Yoda.

Princess Leia still does the best she can to balance several different tasks all while being pregnant. Leia doesn't have the time to devote her life to becoming a Jedi because the New Republic stands on very unstable ground and the Empire finally seems to be gaining strength again. Plus, there may be a traitor among the Republic as well.

Even though Zahn does a very good job of creating a much different story than the one told in the Original trilogy he also doesn't shy away from tying his books back to the story we know so well. There are often times where characters find themselves reminiscing about the height of the Civil War. It never feels unnatural, but it really displays how much Star Wars knowledge Zahn had back when there still wasn't a lot of material out there to research.

Thrawn may have failed after the events of the first part of this trilogy, but his overall plan remains in tact. Thrawn probably isn't the beloved character in my eyes that he is in others, but I do appreciate him because he's different. He's in it for the long haul and the small victories almost mean more to him than the big ones. He's not physically menacing but its his intelligence that makes him a threat.

Mara Jade also develops quite smoothly through this book. I didn't quite see the love for her after the first novel mostly because she just seemed cranky and hated Luke. Her hatred of him is somewhat warranted, but I'm glad that she was able to put it behind her this time. There is a cool moment where Mara and Luke have no choice but to team up for a mission and its one of the coolest moments in the book. It's happening slowly but steady but you can start to see fragments of the relationship that will probably develop between them over several books. Talon Karrde, another of Zahn's original characters seems to get a big improvement in this movie as well. He proves to be a bit of an anti-hero in a world where the Star Wars Galaxy is still very black and white.

The main focus of the book is probably the conflict over these collection of ships that go by several names, but the easiest to remember is the Dark Force. Both sides of the conflict want to acquire these ships because they could give them an advantage in the still ongoing war. There are several characters that claim to have intelligence surrounding these long deserted ships. It gets to the point where its basically a race to see who can get their hands on these ships first. The finale to this book almost makes me feel sad that we will probably never see it onscreen because it just seems like it would be complimented that much more by a film.

The book does end of a bit of a cliffhanger. This series of books appears to basically take place over about a year or possibly a few months. This book takes place where the last book left off. Really I hope to be able to squeeze the final book in this trilogy The Last Command because more new Star Wars canon novels continue to hit the shelves.