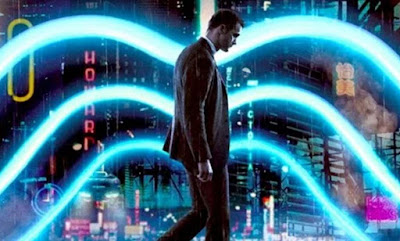 I'm always willing to take a gamble on some sci-fi. Especially when it is coming from a name like Duncan Jones, the son of David Bowie. Warcraft was a bit of a dud for Jones, but I thought that Moon and Source Code were both very well executed films with complex plots. So when I realized that his next film Mute would be released on Netflix and he was returning to sci-fi I was pretty excited. Unfortunately it looks like this project is another dud for Jones and another dud for Netflix.

Jones appears to have had a script for Mute for several years. He pitched it to Moon star Sam Rockwell before Moon began production. While in production its been labeled as a "spiritual sequel" to Jones' debut film. Rockwell did end up playing a small and somewhat spoilery role in Mute. Jones dedicates the film to his father David Jones, more famously known as David Bowie.

The film's protagonist is a mute Amish bartender living in future Berlin named Leo (Alexander Skarsgard). He damaged his vocal cords as a young boy and his Amish heritage kept him from getting the injury repaired so he hasn't been able to speak since. When Leo's waitress girlfriend suddenly disappears he is forced to explore the criminal underworld to try and find her.

Its noticeable almost from the beginning that Jones crafting a movie very similar to Blade Runner. Its a noir style detective movie that takes place in a future landscape, but in a lot of ways this future world looks conveniently similar to ours. There are flying cars but cars that drive on regular roads still exist as well. There's a lot of use of bright neon color must like other sci-fi works. Our Amish protagonist tries to limit the amount of technology he uses as its a part of his religion. This story is so simple and relatively unaffected by the world around it that it easily could've taken place in modern day or even the past and the results would be nearly the same.

The production design of the film is very well done and its very well shot. Its an interesting environment to say the least. I just wish that it was used more. The plot is very plain considering how well executed the world around it is and the plot moves way slower than it needs to.

Skarsgard deserves a lot credit for creating a character I could sympathize with a bit. He almost needs to make up for his inability to speak by intervening physically whenever he gets into trouble. Creating this type of character that has to display so much through expression is an ambitious move, but I never really felt like it truly worked.

The performances of Paul Rudd and Justin Theroux are likely to get mixed reception. Both veteran actors appear to be having a great time playing their respective characters. Both men are ex-military and enter the film working as underground surgeons for the a criminal organization. After a lengthy wait we eventually learn that Rudd and Theroux are intended to be the villains of the film and their story eventually weaves into Skarsgard. I love Paul Rudd and I can probably say that I've never labeled him as a problem with any film, but he's playing against type here (most of the time) and I could never buy it. Rudd seems to be intended to be this intimidating presence on screen but there are many moments where he returns to the goofy Paul Rudd that we all know and he loses everything he's tried to build with the character.

While I would chalk this movie up as a failure I still have a lot of faith in Duncan Jones. I'm still probably going to watch his next film. I still do applaud the effort here a little bit. The main problem seems to be that he was a little afraid to go for it and dive a little deeper into this world.