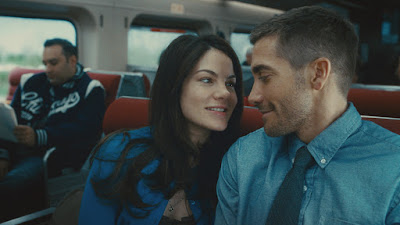 This February is going to be my second attempt at a Letterboxd Scavenger Hunt. I completed my first one last year. I started this hunt off with Source Code as the first task called for a time travel film. If you want to check out the rest of my tasks for this months Scavenger Hunt you can see them here Directed by Duncan Jones (the son of David Bowie) Source Code probably isn't quite an ambitious as his first movie Moon but its still a great sci-fi movie with a strong concept and after viewing it I think I may like it more than Moon.

Colter Stevens (Jake Gyllenhaal) wakes up on a train and quickly realizes that he's in an entirely different body. The train has a bomb on board set to go off in 8 minutes, but every time the bomb explodes Stevens is given another chance to return to the body and find the bomb and the person who put it there. Its hard to go much further without spoiling. I'll make it clear that its probably best to go into this movie without watching trailers.

Duncan Jones showed with Moon that he could really go far with a good premise. Source Code is ambitious but the plot never gets too out of hand because its simplified quite well. The resemblance to Groundhog Day is an obvious one, but its just a little bit more complicated than that. Ben Ripley's script is excellent and its probably more of a mystery movie than a sci-fi movie. Gyllenhaal is a great anchor for this story and the audience learns more as he learns more. At 90 minutes its extremely fast paced, but I can't see it running any longer than that either.

Michelle Monaghan is an easy woman to love and she won me over very quickly as she often does. In a lot of ways it is probably her who bring the comparisons to Groundhog Day because she resembles the very charming Andie McDowell from that film except we didn't have to watch McDowell die over and over again. I was shocked the relationship between Gyllenhaal and Monaghan could develop so smoothly over a 90 minute film with so much else going on.

The only point where the film may drag a little bit is the ending. It seemed like 90 minutes may have just been 10 minutes too long. The ending does wrap up so tightly though. Its efforts like this that make me excited for whatever Duncan Jones chooses to do next, which just so happens to be a film called Mute dropping on Netflix in about 3 weeks. I'm in.