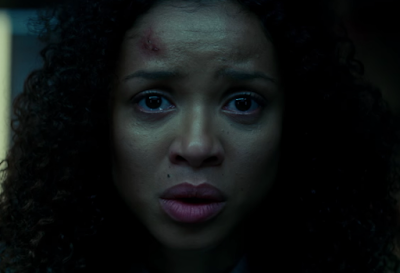 I've decided since I'm not much of a football guy I figured I'd take a second to mark my thoughts on the surprise release of The Cloverfield Paradox that was announced suddenly during the Super Bowl today. The third movie in the Cloverfield universe has been heavily hinted at for about a year and its gone under several names. Still it made it quite high on my most anticipated list for 2018. Last year there was a movie involving JJ Abrams named God Particle that was believed to be a Cloverfield sequel and lately we've heard rumors of a new title called Cloverfied Station. Now it appears to have been confirmed.

I (and the rest of the world) got out bell rung when a teaser trailer announced that not only will a new Cloverfield movie debut on Netflix (which had been rumored) but it would debut tonight. Right after the conclusion of the Super Bowl. JJ Abrams has thrown us for a loop once again with his marketing campaign and its suddenly turned my night into a very busy one. This is Us fans like myself must get through the really tough episode that we have coming after the Super Bowl and then I've got to watch the newly titled The Cloverfield Paradox as well. It'll be a 3 am night for me pretty easy.

I just needed a second to express my shock with this release. My thoughts on the movie probably won't come until tomorrow because its going to be pretty late by the time I finish the movie. Still I needed to talk about how cool this franchise is. Even if I don't end up liking the film I'll still be really excited about what may come next in this franchise. We don't even have time to speculate about how well the movie will tie in to the other movies. We know that there was little connection between the first two movies but the teaser did make a bit of an effort to tease an connection to the first film. Plus we've got a good cast composed of Daniel Bruhl, Chris O'Dowd, Gugu Mbatha-Raw and David Oyelowo gets me even more excited. I'll be back after I see the movie. 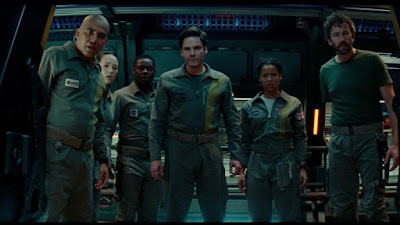 I woke up this morning after enjoying The Cloverfield Paradox quite a bit and I was shocked to find that a lot of trusted critics and sites weren't exactly fond of the movie. In some ways the rough reviews make these release even more genius because so many people went and viewed the film without any shortfalls of the film previously mentioned by critics in early reviews. There are still lots of people that came to that conclusion on their own after I checked Letterboxd, but to me this was a pretty engaging film.

I'll try to keep spoilers low on this, but I'm sure if you're a hardcore fan of the Cloverfield franchise you've already seen the movie or will have seen it by the end of today. So, the film revolves around an ensemble crew aboard a space station appropriately called The Cloverfield Station. The crew has been in space for two years trying to solve the pending energy crisis by using an particle accelerator in space. After two years of failure the crew finally gets a trial to work, but the success comes with some unexpected side effects. The first being that the Earth has essentially disappeared.

The real highlight of the movie is the cast, which has been public knowledge for quite a while now. The cast mostly feels like an ensemble although Gugu Mbatha-Raw does take a more defined role than the rest of the crew that includes Daniel Bruhl, David Oyelowo and Chris O'Dowd. Mbatha-Raw is the stand out of the cast and its only her character and her husband who remains on Earth that get explored at all. The only role I remotely remember her in was as Will Smith's wife in Concussion, but she appears to be in lots of films that I just haven't seen yet.

The disappearance of the Earth sets a lot of WTF moments into motion and mystery starts to develop about what actually happened and why the Earth. Things just seem to get weirder and weirder. The main tie in to the other entries in the Cloverfield franchise actually occur on Earth where Mbatha-Raw's husband is. I see a lot of people mentioning that the Cloverfield tie-ins are more of a subplot and they were probably added into the movie after it had already been completed, but I didn't feel that it was obvious.

The Cloverfield Paradox is heavily inspired by some horror classics. Alien and The Thing are easily the most obvious, but I felt like there was a bit of a tribute to Poltergeist in one scene and there was a moment that reminded me a bit of JJ Abram's own LOST. Later I've heard comparisons the mixed Life from last year. Still, to me it felt like a fresh concept. I was swept up in the mystery.

Somebody who I thought was tragically misused was Chris O'Dowd. I love the man in basically everything he does. He so natural funny, but I felt that he added a little too much humor this time around. I never felt like the humor was an essential part of the story. I still love him, but I found his constant lighthearted jokes to take me out of the movie a bit.

I should probably address that the shock of seeing this movie 3 hours after it was announced may effect my thoughts on the film. Looking back on it in a few months may change my outlook on it a lot, but currently I think this is a gamble that really paid off for Netflix. I do hope that this movie will generate an opinion similar to Bright where the audience seems to have enjoyed it a lot more than the critics. I've heard that a 4th Cloverfield movie has supposedly already wrapped up filming and I hope that critical failure won't keep JJ Abrams from taking risks on these movies. At this point he's done such an original effort with the marketing campaigns that I'm probably going to be interested in every Cloverfield movie that gets a release.

The Cloverfield Paradox gets 65 out of 100