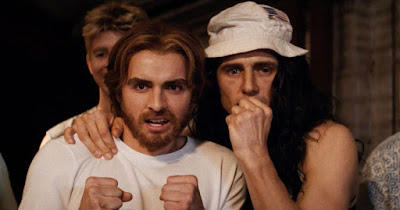 I've never considered myself to be an expert on The Room, to this day I've only ever seen it once, but when word broke that James Franco was going to attempt a Tommy Wiseau biopic I couldn't help but be interested, especially when considering the cast he compiled. I am a fairly big fan of Franco as an actor but I have hardly watched any of his work as a director. The Disaster Artist was the first of his directorial efforts that I've seen outside of one episode of the 11.22.63 miniseries that I didn't know he directed until I looked it up.

The film is based on a book of the same name written by Greg Sestero (the man who plays Mark in the film) and takes place over about five years starting in 1998 all the way up to the premiere of The Room. A young Greg Sestero meets Tommy Wiseau in an acting class and the two form a very quick friendship despite Wiseau's secretive nature about his past. Both men look to become "big stars" in Hollywood and when the film industry chews them up and spits them out they decide to make their own movie.

I was expecting to enjoy this film, but I was prepared for how inspirational it ended up being. it has a lot to say about persuing your dreams and staying loyal to your friends, all while being fairly funny. Franco's portrayal of Wiseau is certainly memorable and really brings the real life character to life, but it never really got to the point where it felt like Franco was making fun of Tommy. I've listened to quite a few interviews with James Franco and some of the other people involved in the production and they really were invested in this content and it shows. The movie has a lot of heart.

I've always felt that Dave Franco was the inferior Franco. I've always found him to be mediocre in most of the stuff he's in. He's just there. I was shocked to find that this pretty much the first time the two brothers have worked together and this is probably the best Dave Franco has ever been. I'm sure that the pair feels so natural together because of their relationship off screen. I've heard from some people that Tommy and Greg weren't as close as the movie leads you to believe, but still I found the duo very entertaining to watch.

The movie does have a very extensive supporting cast, but most of them are just slightly elevated above cameo status. Zac Efron, Megan Mullally, Judd Apatow, Jason Mantzoukas, Randal Park, Sharon Stone and Bob Odenkirk are a short list of the people who appear in the film. Many only appear in one scene and I'm sure its just that many people wanted to be somehow involved in this project. Seth Rogen, Josh Hutcherson, Jacki Weaver and Ari Graynor all play members of the production and their roles are more sizeable.

The template of the movie is fairly traditional for a biopic, which is still fine because it is really enjoyable to watch the whole way through. I do wish at times that they went a little deeper with Wiseau. Not that they are taking away his mystery, but just show a little more about what made the man tick. When Greg starts spending more time with his girlfriend (played by Franco's real wife Alison Brie) we start to see a little jealousy form. I was hoping that the film would take more of a stance on whether Wiseau was just a weirdo who got lucky once or if he was really a genius who made a movie that still fills theatres 15 years after its release.

The humorous side to the movie always stays fairly present and a lot of the best jokes are shown through the filming of some of the most infamous scenes from The Room. There are a lot of laughs whether its during the production of the movie or outside of it. I don't think you have to have seen The Room to enjoy this movie, but it does become a great companion to the film. Plus, I'm sure it will be opened up to a whole new audience. Its destined to be part of a double feature for years to come. Its flawed, but I really enjoyed this film. Its a movie I'll be coming back to a lot.