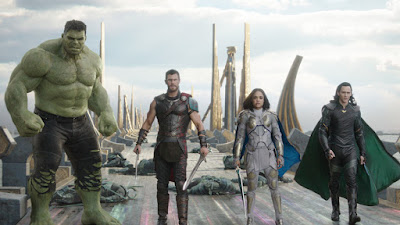 Thor's story is the third trilogy of the MCU and going into Ragnarok Thor kind of took a back seat to Iron Man and Captain America in the Avengers. Fans seemed to respond more to those two characters. Ragnarok is the end of what seems like quite a gap for the Thor character. He was one of the main characters that wasn't involved in the conflict in Captain America: Civil War and he hasn't popped up in anyone else's films lately either. This is really the first we've heard from Thor since 2015 which seems like quite a while ago considering how many Marvel movies we get in a year now.

Thor was one of the more underrated movies of the MCU I haven't seen it for quite a few years but I really enjoyed it. Thor: The Dark World is considered one of the weaker entries in the universe at this point. I watched it in the theater when it first came out and really enjoyed it, but I visited it a few years later and didn't consider it to be as strong the second time. Marvel was somewhat proactive and Ragnarok serves as a bit of a reboot for the character. It takes more of a Sci-Fi direction now rather than the fantasy angle. Taika Waititi graduates from well received independent filmmaker to the next popular Marvel helmer.

In this finale to the trilogy Thor gets imprisoned in another realm and is entered in the Contest of Champions against his will and his forced to face off with his old ally the Hulk who was entered into the contest as well. Thor must find a way to escape and return to his home land of Asgard in order to stop Ragnarok (the destruction of Asgard) after the evil Hela takes possession of it.

Ragnarok is the definitive film in the Thor trilogy. It takes more of a traditional fun direction that the other Marvel movies have embraces and Taika Waititi, who is known for his comedy efforts at this point adds some contemporary humor to Thor. I found that the movie didn't get off to the best start because it took a little bit of time to get used to the changes and a lot of stuff goes on in the first few minutes of the movie Thor appears in several different realms in the first half hour and interacts with a lot of characters. I could understand why someone would consider the film to be a little messy to start out but it eventually finds its groove.

The look of the film shares some resemblance to Guardians of the Galaxy with some cool designs on the new planet Sakaar. Visually its one of the most impressive Marvel films to date. I'm not sure if it quite rivals the Guardians films but its among the best so far. It also really expands the Marvel galaxy in ways that few movies have done to date.

A lot of the problems with the movie are mostly the ones that have plagued Marvel almost from the beginning. Hela, the film's villain isn't as cool as I'd hoped when Cate Blanchett was announced. The performance that Blanchett is great, and it is cool to see a top tier actress take this sort of role in the MCU, but I'll admit I'm a little disappointed.

Apart from that one blunder with the villain I was happy with the portrayal of every other character. This film has a lot of characters, but it really never gets to the point where it feels like there is too many. Thor may be slightly different than we remember but he still develops into the leader that he hopes to be at the start of the first film and his arrogance continues to fade. Marvel once again proves to be able to take Loki in an interesting direction. Loki almost belongs on the same playing field as Tony Stark as one of the characters that Marvel continues to ace time and time again. I feel like his story will come to a very interesting conclusion in Avengers: Infinity War later this year. This story introduces some interesting concepts with the Hulk. The Hulk is basically able to have a conversation now instead of just when he is Bruce Banner. Mark Ruffalo does a great job as one of the only real mortals involved in the movie and he gets a lot more of a chance to be funny as well. Finally, I wanted to mentioned Tessa Thompson. She really impressed me in Creed and I've been surprised that I really haven't seen her in anything since her appearance in that movie. Once again she shows that she's a star in the making and I hope that she has a future in the Marvel galaxy.

Taika Waititi seems to have given one of the best characters to himself in Korg. Its unfortunate that they couldn't have found a bigger role for the character, but he has so many great lines. The script is stuffed full of great Korg one liners and I sure hope that he'll be back at some point in another film. Karl Urban makes a pretty big impact on the film too as does Jeff Goldblum. The supporting cast is big but everyone gets to have a big moment.

Overall Ragnarok is simply another triumph for Marvel. I don't think I liked this entry as much as I loved Spider-Man: Homecoming but its still a movie that I will come back to and it will likely be more often than the Thor movies that came before it. Now I just need to get out and see Black Panther.