Oscar Season is well underway and we are only a few days away from the ceremony. I've been able to catch up with a few of the films that are nominated in key categories over the past few days and I wanted to make some remarks on them. Unfortunately I'm still waiting on some of the films that either didn't play in my area or won't be available for rental until after the Oscars. I've been really looking forward to seeing stuff like The Disaster Artist, The Post and The Shape of Water but that probably won't happen for a little while yet. 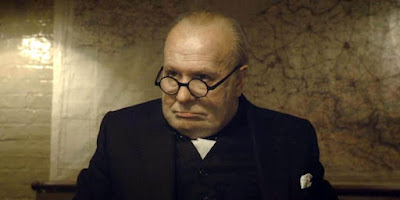 Darkest Hour (2017): Joe Wright: Darkest Hour has been nominated for 6 Oscars the most notable being Best Picture and Best Actor for Gary Oldman. I do think this will be the year that Gary Oldman wins. Oldman is one of the best actors of his generation but somehow he's gone through his prime with only one nomination prior to this one in Tinker Tailor Solider Spy.

As far as I'm concerned that only reason that this movie is even worth watching is Oldman's performance as Winston Churchill. Oldman is unrecognizable thanks to some help from prosthetics and a fat suit, but he really truly does become Winston Churchill. The story itself isn't really as engaging as Oldman is. I'll admit that it could even be considered boring which is unfortunate because all the acting is great and the film is very well made. Its just not something I would watch more than once. Should Oldman have been nominated for acting? Yes, and he should probably win, but overall the movie is not Oscar worthy.

Reccomendation: See it for Oldman's performance. 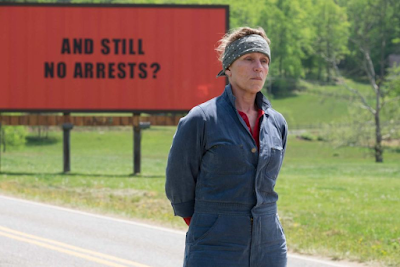 Three Billboards Outside Ebbing, Missouri (2017): Martin McDonagh: I've only seen one McDonagh film before this and that was Seven Psychopaths, a movie I liked quite a bit but didn't love. I really enjoyed this one though. Three Billboards has an incredibly original script and some of the best performances of the year. This movie is so dark that I was a bit shocked that some of the awards shows have held it in such high regard, but after seeing it the film has proved its worth.

Frances McDormand is perfectly cast as this angry mom and we immediately feel for her because of the situation that she is in. I'm sure that if I was a parent I would be able to relate even further to this. Sam Rockwell and Woody Harrelson are both welcome nominations in the supporting category with Rockwell very likely to win and I'd be completely fine with that. Rockwell has been an underdog for far too long.

Recommendation: One of the best movies of the year. See it. 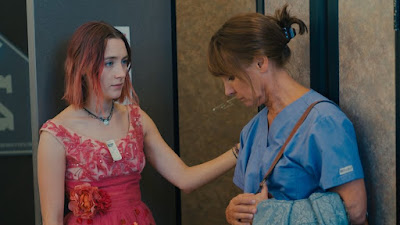 Lady Bird (2017): Greta Gerwig: Indie darling Greta Gerwig has already gained a lot of attention with her long list of great performances and some work with some of the best directors out there. Now she has made her own attempt at writing and directing with Lady Bird. I'll just mention that people are often referring to this movie as a debut, but I've noticed that she already co-directed a movie with Joe Swanberg called Nights and Weekends back in 2008. Does this one not count?

I'm not a girl, but I still found a lot of things I could connect with in Lady Bird. It covers a lot of things that I could relate to in my own life. Plus, Saoirse Ronan is playing a young girl that I felt like I had met before in my own high school days. The depiction of the relationship between Lady Bird and her mother played by Laurie Metcalf is one of the most genuine I've seen on screen. Whenever they talk to each other it seems like things could explode at any minute. Its explores friendship and young love and I just felt so close to all of it. I've always had a bit of a soft spot for coming of age movies but this is certainly one of the strongest in recent memory.

Lady Bird been nominated 5 times in 5 fairly major categories. I would be completely fine with seeing it win any of the awards its eligible for. I've also seen that it was a huge financial success for A24, their best to date.

Reccomendation: One of the best movies of the year. See it.

That's a quick summary of my thoughts on some of the 2017 Oscar movies. I've still got a lot to check out and I'll hopefully be seeing Roman J. Israel, Esq and The Florida Project fairly soon, or at least before the Oscars because they are both available for rent now.