Weekly Roundup: When We First Met, Mayhem, and Professor Marston and the Wonder Women

Here is a new weekly roundup, a segment I've been neglecting for about a month. It should probably be a little longer than this, but I'm still in the midst of my Scavenger Hunt for Leterboxd and I'm burning through more movies than I can usually track my thoughts on. Here are a few recent watches that made an impact in one way or another. 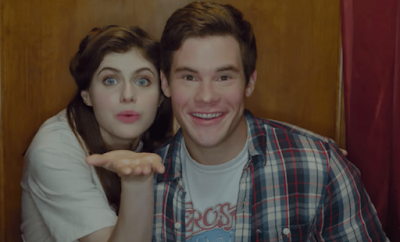 When We First Met (2018): Ari Sandel: This is one of the many Netflix original films that have been released so far in 2018. I'm starting to think its impossible to keep up with the movies that these guys release. I'm sure most people are aware that Netflix doesn't appear to be able to produce the amount of quality in its films that it does in its TV. When We First Met basically falls into the middle of the pack when it comes to Netflix originals.

Starring Adam DeVine, Alexandra Daddario and Robbie Amell when we first met is a straight forward time travel movie from the director of The DUFF. As far as I'm concerned its perfectly watchable, and it does have a lot of heart, but considering how many Groundhog Day style plots we've gotten in the last 5 years or so this comedy starts to feel less fresh. This is possibly the first time that I actually enjoyed watching Adam DeVine. I've always found that he's trying way too hard for jokes in most of his projects.

You can basically predict all the story notes that take place in the film and you know exactly what his final revelation at the end of the film will be. Still its a completely watchable fluffy film.

Reccomendation: Generic, but fun if you're a fan of the cast. 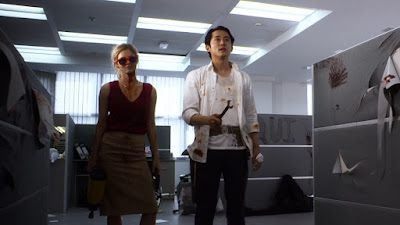 Mayhem (2017): Joe Lynch: Another film that has a similar concept to another film this year. Mayhem is essentially another retelling of The Belko Experiment and of the two movies I like Belko more. Don't get me wrong Mayhem is still a pretty strong movie and both are fairly well performed and well made.

I really thought Samara Weaving stole the show. If she's bound to become a horror favorite that would be completely fine with me. She was in McG's The Babysitter recently too. I think my reasoning for enjoying this movie a little less was the amount of office politics that became such a large part of the movie. Steve Yeun makes for a solid protagonist and I guess the business politics gives his character a bit of motivation, but the movie was fun enough that I never felt I needed it.

Mayhem is streaming on Shudder right now. You can see it with a free weekly trial period if you're interested. 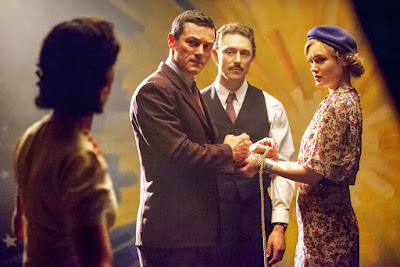 Professor Marston and the Wonder Women (2017): Angela Robinson: I picked this movie for the Scavenger Hunt topic "a film with a message you don't agree with" because it appeared to be about infidelity, but its actually a lot more interesting than that. As you can probably tell by the title that this is a biopic about the man who created Wonder Woman and its a story that deserved to be told and probably should have been seen by more people than it was.

The format of this biopic is fairly traditional, but the cast and the relationship among that cast is what makes it so different. Luke Evan, Rebecca Hall and Bella Heathcote are able to bring this slightly odd relationship to the screen and they make it look so natural. The creation of Wonder Woman looms over the whole film as Marston seems to use these two women he loves as the inspiration for the character, but the actual creation of the character probably has a smaller part to play than the creation of the lie detector.

I see that the family of the people showcased in the film have dismissed this story as complete fiction, but its a story that's endlessly interesting.