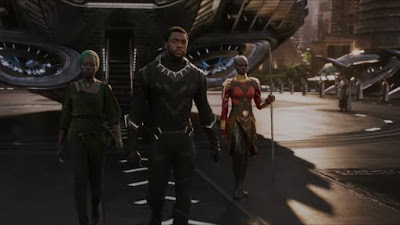 I think I'm convinced that Black Panther is the new yard stick that all standalone MCU films should be measured. After one viewing this is in competition for my favorite MCU movie so far. Ryan Coogler has certainly established himself as one of the best actors out there. Fruitvale Station told a brilliant true story, Creed was adding another piece to the Rocky saga that we didn't know we wanted and now he's rocked the world with this big budget Marvel smash.

We were introduced to Chadwick Boseman's Black Panther in Captain America: Civil War. Black Panther, aka T'Challa got involved in the conflict after his father was killed in an attack by the Winter Solider. His first solo film chronicles T'Challa's return home to the advanced African nation Wakanda after his father's death. T'Challa becomes king, but is immediately challenged by a mysterious outsider who has unexpected connection to the hidden world.

I really feel what makes Black Panther so excellent is how great the characters are. This movie has a really big cast, full of some top tier talent, but everybody gets to serve a meaty character. It also takes a bit of a shift from the usual Marvel stories. The humor is still present, but not nearly as invasive as other entries and the villain gets more depth than any Marvel villain yet. After one viewing I believe Michael B. Jordon's Killmonger to be the strongest villain of any MCU film yet. Killmonger's motivations are actually quite understandable, it just that he doesn't go about it the right way. I'll also mention that Andy Serkis' Ulysses Klaue is no slouch either despite being in a lot less of the film. There was a point where I almost felt like he was going to steal the movie.

The Black Panther is surrounded by several really strong female characters. Lupita N'yongo plays the love interest to T'Challa and for once it was a romance that didn't feel totally tacked on. Its very natural, the pair have some implied history going into the movie and the love for each other is certainly there. Letita Wright is likely to be the breakout star of the cast as T'Challa's tech savvy sister, another really strong, smart and fun female character.

I will admit that the movie does get off to a bit of a slow start. The first half hour is used to build up Wakanda and the people inside it, as well as some of their traditions. There is one heavily James Bond inspired scene where the story really picks up and it never lets got from there. I couldn't get over how engaged I was in this story. We already know that a lot of these characters reprise their roles in later MCU films, but Coogler really establishes some stakes and there are some pretty heartbreaking moments. Its one of Marvel's most emotional efforts.

I hope I'm not exaggerating, but as of right now it could be possible that Black Panther is the best Marvel film to date. It may have finally dethroned The Avengers at the top of my list. If you were excited for Infinity War you'll somehow be more excited after Black Panther.