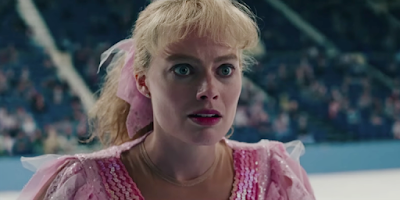 You don't have to be a sports fan to be aware of Tonya Harding. I'm certainly not a figure skating fan, but there aren't many people that have made it this far in life without seeing the infamous clip of Nancy Kerrigan screaming after being attacked after a practice session in early 1994 even if you don't know what the cause of all the fuss actually was. There is still a lot of mystery behind this event (referred to as The Incident in the movie) and whether Harding was ever really involved or not.

The first half of I, Tonya covers her rise to stardom despite great odds. Her cold and vicious mother LaVona pushes her daughter to the top despite their financial struggles even when Tonya is often ignored during competitions because of her presentation. When you watch the first half of the movie its almost hard to believe that Tonya made it all the way to the Olympics based on her upbringing and then her eventual marriage to Jeff Gillooly which was probably even more volatile than her relationship with her mother.

The movie really makes you feel for Tonya (who is played beautifully by Margot Robbie) because it just never really feels like life gave her a fair shake. She spent her life surrounded by idiots and at the peak of her career she paid the price. She spends the whole movie blaming other people for her failures and for the most part she is probably right. While director Craig Gillespie and screenwriter Steven Rogers make us more aware of Tonya's hardship they don't necessarily claim that she had no involvement in the attack on Kerrigan. The film is told from several different perspectives with several fourth wall breaks and a few sprinkles of humor added in mostly by Allison Janney who plays Tonya's mother. None of the characters are the least bit reliable and everybody's points of view contradict the other. Its really genius.

Sebastian Stan plays Gillooly, and he does a fairly impressive job. I've always found Stan to be a fairly plain actor. He appears in a lot of movies but I rarely ever feel like he's impressed me. The real star performances are Robbie and Janney though. Margot Robbie really establishes herself as more than just a pretty face with this performance. It really gets me excited for what she may have in store for her career. We did just hear that she has joined Quentin Tarantino's new movie so that something we can look forward too. I probably would've given the Best Supporting Actress Oscar to Laurie Metcalf in Lady Bird over Janney, but she is still very impressive. Those two characters are almost the exact opposite of each other.

I, Tonya is both ambitious but suitable for a wide audience. Obviously this movie isn't for kids, but man I had a great time watching it and I think its on the short list of must see movies for 2017.