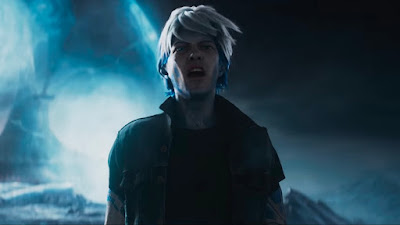 I was in a hurry to take in the film adaptation of Ready Player One because I was a really big fan of the book. Its really quite impressive that a film like this could ever be made because there is so many references to properties. The inability to get licencing really keeps this movie from being a loyal adaptation, but that's not really one of my complaints. I'm sure the fact that prestigious Steven Spielberg was directing the movie helped them acquire many of them.

Ready Player One seems to have come at the perfect time with nostalgia based stories like Stranger Things and IT really making an impact with audiences. The novel's writer Ernest Cline does receive a screenwriting credit alongside Zak Penn. The story takes a fairly different direction than the book, but the characters remain in tact for the most part.

When famed video game designer and creator of the OASIS James Halliday dies the hunt for the Easter Egg begins. Hunting for the egg Halliday hid in the OASIS takes the world by storm as the winner of the contest acquires the OASIS and Halliday's fortune. Wade Watts knows Halliday like few people do and he hopes to be the first to win.

The whole young cast is quite impressive. Tye Sheridan has shown a lot of a potential in supporting roles up to this point and he proves to be totally capable in the lead role. Wade is still the likeable fun character that he was in the book and his ensemble of friends have a great dynamic too. I'm not really familiar with Lena Waithe, but she certainly makes an impact as Aech Wade's best friend. Unfortunately, the love story between Wade and Samantha is lacking a bit (which was also a bit of a problem in the novel). Ben Mendelsohn still proves to be a great villain as Sorrento, even if his fake teeth were a little distracting. Mark Rylance is very memorable as Halliday and brings a lot of character to the role even though the role is limited.

Spielberg really aces the action sequences. There is a great race scene and a great sequence that revolves around The Shining. There are so many references that it almost certainly will need multiple viewings to notice them all. The adventure is definitely still fun enough that the audience should still be able to have fun even if those references don't register, but it certainly compliments the viewing experience if you are able to notice.

In some ways Ready Player One is the return to form for Spielberg. We haven't seen Spielberg return to blockbuster territory for a few years. I don't consider it to be another Spielberg masterpiece and I was happy to see that he wasn't tooting his own horn for 2 hours either. Its a fun movie that deserves to be seen on the big screen.