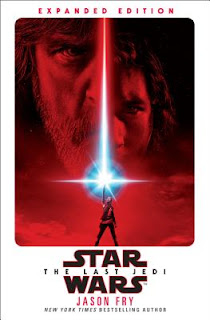 The Star Wars novelizations are really the only movie adaptations that I would probably ever read. I do like to be able to read a little more into what the characters are thinking. I started reading Jason Fry's adaptation of The Last Jedi before I actually got a chance to see the movie for a second time. Just as a refresher, I really liked the movie and I felt like it had some of the coolest Star Wars moments yet in it. Its far from flawless, but perhaps this novelization could have repair some of the issues, especially during the disappointing Canto Bight sequence.

I really want to take a second to praise Jason Fry. He's probably familiar to some Star Wars book fans because he did write the YA novel Weapon of a Jedi that came out in 2015 before the release of The Force Awakens. He's done several other Star Wars projects too and it appears that he has a grasp on Star Wars canon that few other writers have. Fry always makes some effort to weave some of the things that we already know about characters from novels and it feels so natural. He seems to have a pretty good working knowledge on other author's work and you will be rewarded reading this novelization if you have already read some of the other Star Wars books.

I'd assume if anyone is reading this that you've probably already seen the movie, so most of the key plot points are already known, but I'll still try to keep spoilers about the new revelations to a minimum. This book was promoted as an "expanded edition" although I don't think there is another version of the book that follows the movie to a tee. These adaptations always cause a bit of confusion with regards to canon because they are based on an early edition of the script and often include scenes that are deleted. Several scenes that we didn't get to see in the movie are included. I don't feel like any of the scenes were that important to have in the movie, but they do really compliment the characters journey. Plus, we get to see the perspectives from some of the characters that were stuck in the background. Admiral Akbar and the new fan favorite Captain Cannady are probably the most notable.

The major characters really benefit from this version of the story too. I'm sure most of the weaker elements of the movie are still the weaker parts of the book, but Luke's story is even stronger because we get a chance to see inside his head and there are a few reveals hidden in the book that make his character even stronger. It may even cause a redemption in fans eyes if they weren't a fan of the direction Rian Johnson went with Luke. Fry even gets a little bit of a chance to talk about how Snoke got in the position he is. Something that canon junkies have been craving.

I wouldn't really consider this adaptation an essential read, but it may be a good way to give the movie another chance if you didn't care for it. If you are new to Star Wars canon this could be a pretty good place to start. I probably say this with every book release, but still overall this book is definitely a thumbs up from me.