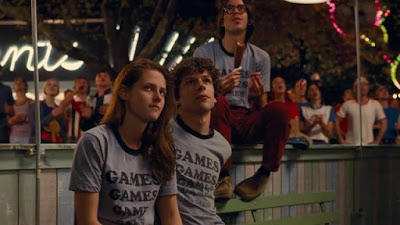 Adventureland was directed by Superbad director Greg Mottola and for some reason I always found this to be a better film than Superbad which I never found to be as enjoyable as people say. Its almost hard to explain why I enjoy this movie so much. I think its mostly just the characters and the natural recreation of the 80s. The film seemed to be marketed as a bit of a raunchy comedy like Superbad but it wasn’t really like that at all.

This movie wasn’t exactly a hit at the box office although it appears to have made a little bit of profit. I didn’t see it for the first time until a few years after it came out when I was watching Netflix with a friend. For some reason I didn’t enjoy it as much as I hoped, probably because I was crowded around a laptop watching it with my friend. At the time I actually thought it had some sort of connection to Zombieland which came out later and also had Jesse Eisenberg in it. Probably just because they both have land in the title. When I caught it again on cable a few years later I was surprised by its quality. I’ve seen it two times since and I love it more and more each time I see it.

Mottola write the script for the movie as well as directed it and it seems to be a bit of a semi-autobiographical story. Set in 1987 a young man named James Brennan, played by Jesse Eisenberg, has just graduated from college and plans to tour Europe for the summer before coming back to go to grad school, but his parents have fallen on hard times and can no longer afford to pay for grad school. So James has no other choice but to get a full time job and pay for school himself. So he gets a job at an rundown amusement park called Adventureland and quickly finds a group of friends who also work there. Most notably a mysterious young girl named Em, played by Kristen Stewart

Most of the talent in this movie are people that I’m not 100% sold on in the first place. I’m certainly not the first one to say that I occasionally find Jesse Eisenberg annoying (probably mostly in the years since this movie was released), but Eisenberg is just enough of a spin on the virgin geek. He’s not actually afraid of girls and is fairly confident. Kristen Stewart has actually established herself as a pretty good actress now that the Twilight movies are in the rearview mirror. By the time she was done with that series of films she had a Razzie win and several nominations, but in the years since she’s gone back to some creative projects and now I tend to be interested in the stuff she’s in. Ryan Reynolds has a smaller role in the movie and we all know that he is normally pretty fun but his movies tend to suck from time to time.

There is definitely some nostalgia involved in this story, the soundtrack is great without really dipping into some of the obvious songs that appear in every film set in the 1980s. Some of the cult acts of the era like The Replacements, The Cure and Lou Reed are represented. Its weird that I can connect with this film so much because I wasn’t quite alive in the era its set in. The story surrounding the young people and questioning what it is you’re going to do with the rest of your life is something we can all connect with. Most of the young cast in the movie are experiencing what is their last summer of freedom before they have to settle down and grow up.

Eisenberg and Stewart have a really natural chemistry, which is why they’ve reunited for 2 films since this one. I think K-Stew really nails the girl next door sort of vibe here. Ryan Reynolds plays the Wooderson in this movie (that does resemble Dazed and Confused in more ways than one) as the older man who somehow still considered to be cool even though he still works at an amusement park and hangs out with kids way younger than him.

Bill Hader and Kristen Wiig are in this movie as well. They add some goofy humor to a story that would probably work just as well without it. It looks like they were just available for a small portion of the shoot and they just improvise a few good jokes and then their scenes are scattered through the film. The effortlessly dry Martin Starr (probably most famous for his role in Freaks and Geeks and now HBOs Silcon Valley) is always a fun addition and every time he’s on screen I’m happy.

I won’t say much more about this because I’m sure there are some people out there who haven’t seen this but should. Its a just a good movie and while it takes a pretty predictable direction its still really charming and enjoyable. Even after multiple watches.