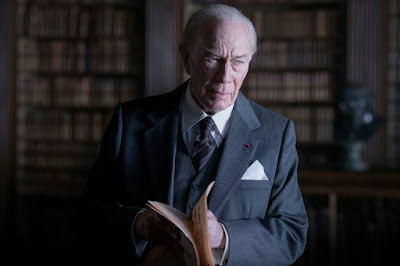 All the Money in the World will probably be more famous for its reshoots and issues behind the scenes than it will be for its quality. Ridley Scott's latest effort and second movie of 2017 falls in the middle of the pack in his filmography. The resurgence that he experienced with The Martian seems to have already died down.

It is pretty difficult to discuss this film without addressing the controversy that surrounded it last fall. Due to the controversy surrounding Kevin Spacey (who was originally played J. Paul Getty) Ridley Scott and Sony decided to replace Spacey with Christopher Plummer with just weeks to spare before its release. Plummer was nominated for an Academy Award for his performance in the film being the oldest actor to be nominated, breaking his own record from Beginners. Michelle Williams and Mark Wahlberg return to shoot some scenes with Plummer and that caused another controversy when Wahlberg drew an exponentially larger salary than Williams.

The movie focuses on the Getty family. In the 1970s J. Paul Getty (Plummer) was the richest man in the world and according for the film was the first person to ever reach a wealth exceeding a billion dollars. Despite his enormous wealth Getty was notoriously frugal and even included payphones in his home so he could save every last cent. When Getty's grandson John Paul Getty III is kidnapped and held for ransom he refuses to pay the kidnappers to guarantee his grandson's safe return.

Paul the Thirds mother Gail (Michelle Williams) by her words isn't a Getty, she just married one and has been divorced from Paul the second thanks to a drug addiction. Gail has her family, but certainly doesn't have the funds to pay the ransom and she tries to convince her former father in law to pay the ransom before the kidnappers get sick of waiting and kill her son. In many ways Gail and Getty are complete opposites. Gail values her family far more than all the money in the world, but the eldest Getty sits firmly on the other side.

Any scene involving Christopher Plummer as Getty is when All the Money in the World is at its strongest. Plummer was reportedly Ridley Scott's first choice for the role, but Sony wanted Spacey because he was a more recognizable name. Plummer's older age certainly limited the amount of prosthetics that were used heavily on the Spacey version of the character. Getty is undoubtedly the most fascinating character in the film. He claims to love his grandchildren dearly, just not as much as his precious money. He is wise, yet heartless. His vast wealth appears to have driven him insane somewhere down the road. Gail seems to be remarkably restrained considering the life of her child is on the line. I'm sure I would've more interested if there was just a little bit more desperation. The kidnapped John Paul the third gets a lot more screen time that I would've expected and I just wasn't as interested in that side of the story.

Mark Wahlberg, in a rare supporting role, plays an employee of Getty's that is helping Gail find her son without costing his boss a fortune. He's salvageable in the role, but this isn't the type of character that he would usually play and it shows.

The story definitely runs a little long, but I was shocked at how well edited it was considering an actor was completely replaced. I just didn't get as engaged in this story as I would've hoped. We also happen to be getting a television adaptation of his story in a show called Trust that is airing on FX with Danny Boyle directing some of the episodes. It could be possible that TV was the better avenue for a story like the Getty's. The film is well made and well performed, but underwhelming overall.