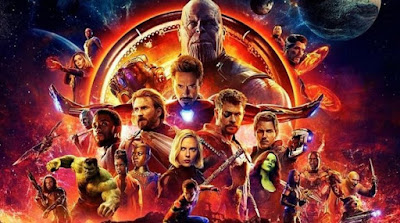 There will be SPOILERS ahead

Avengers: Infinity War is probably going to go down as one of the landmark blockbusters in history. It is absolutely filled to the brim with star power and its hard to believe that it only took Marvel 10 years to build to this moment. Who would've known that watching Iron Man in the theater in 2008 would eventually build to this? Would you have even considered that there was anywhere further to go after the first Avengers? I probably wouldn't have. Marvel's universe building is nearly flawless and Infinity War is just icing on the cake.

Infinity War is remarkably balanced considering how many characters are stuffed into the movie. I found that the scenes were actually a lot longer than I expected. They weren't jumping from location to location too often and when they did it was quite smoothly. Each story focused on another group of characters and I found them all equally interesting, which is a hard thing to do. Its something The Last Jedi wasn't quite able to do. Some key characters don't appear until much later in the film. Most notably the characters from Wakanda. I thought that was possibly a bit of proof that Marvel didn't know that Black Panther was going to be such an phenomenon. There are a lot of great pairings with characters that had never met each other previously. The Russo brothers do an excellent job of weaving the Guardians of the Galaxy into the plot. Pairing Thor with Rocket was genius. I thought that Doctor Strange was one of the stand out heroes and he was one of the characters that I didn't really care for in his own film. Marvel continues to prove that there are more places to go with Tony Stark and after he survived the film I found myself surprisingly happy that we would be seeing him again in at least one more movie. Gamora is given more to do due to her connection with Thanos. The flashback sequences are actually between her and Thanos are legitimately heartbreaking and obviously the scene where Thanos is forced to kill her is a tragedy.

Thanos is 100% the real deal. I know at this point I'm about the millionth person to say that but it is true. Thanos has clear motivations. Clearing out half of the galaxy so those remaining can thrive ends up being a plan the audience can understand and he's willing to do whatever it takes to get the job done. He's established as a legitimate threat in the opening scene by defeating the Hulk and killing Loki, who was probably the largest threat for the Avengers up to that point. Josh Brolin deserves a lot of credit for how Thanos is portrayed as his performance really shines through all the CGI. You can still tell he's in there. As sad as the ending to this movie is it still feels really complete when Thanos is shown living in a peaceful cabin. When a young Gamora asks Thanos how much his form of peace cost him and he says "everything" it nearly brought a tear to my eye. The Russo's have claimed that Thanos was going to be the movies main character and it was definitely true.

There were a few characters that I was a little bit disappointed by. I still loved the movie overall and its balanced out by the characters who really got a chance to shine. Captain America and T'Challa really didn't seem like they had a lot to do. I'm sure now that half of the cast is gone Cap will have a much bigger part to play in the second part of the story. T'Challa is gone, at least that's where the movie ends. When T'Challla turns to dust after the snap that is basically when you begin to assume this isn't going to be permanent, but watching Peter Parker panic when he's about to die is heartbreaking. Tom Holland does such a great job at that moment. His youth is one of the key factors to Spider-Man as a character and that moment is one of the saddest in the film. It will almost certainly motivate Tony Stark to save everyone since he was left to comfort Peter when he died. Drax is absolutely hilarious in this movie. It seems like he's been shifted to be funny and not much else. They do make a quick mention of Thanos killing his family, but it seems like he's been changed between Guardians 1 & 2 and continues down that path in Infinity War. I was a little disappointed that the deaths of half of the universe can almost be completely pinned on Peter Quill. Star Lord obviously ruins everything when he learns of Gamora's death right before they are able to pry the gauntlet off Thanos hand.

The Red Skull surprise was a welcome one. Even if he didn't really end up giving him much of all role to play. I eventually learned that the character wasn't played by Hugo Weaving like it was in Captain America: The First Avenger. That character really could've ended up being anyone, but it was a nice little fan service moment. There wasn't much mind paid to it.

Now, the next year worth of speculation will reach its pinnacle over the next few days. I think the story is well constructed for most of the characters to be brought back fairly easy. I'm glad they delayed a few things for the next film. For example, Iron Man and Captain America never meet face to face in this film. I'd assume the relationship between the Hulk and Black Widow will be addressed.

All in all Infinity War ended up completely meeting, or possibly exceeding my expectations. I'll be first in line for part 2 next year and I'm looking forward to hearing what the title of the film will be since the Russo have been hiding it as it was considered a spoiler. I'm glad the "who is going to die?" people probably got a bit of a surprise as both Captain America and Iron Man lived. There is that moment when it looks like Tony will die and I realized in that moment how much I wanted to see Robert Downey Jr. hang around for a little longer so I was glad Thanos didn't deliver the killing blow. Anyway, I tried to avoid saying everything about this movie that has already been said. Its awesome and if you're a Marvel fan you should see it, but you don't need me to tell you that.