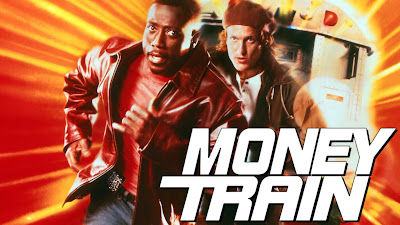 Money Train came out 3 years after White Men Can't Jump in 1995 and its probably not much more than an effort to capitalize on the dynamic between Snipes and Harrelson. To be honest, their chemistry is still probably the strongest element of the movie. The movie is a bit of a mess otherwise. Still, I'd happily watch this again. I'd probably buy it on bluray too.

Its a bit difficult to give a synopsis for this movie because it starts out much differently than it ends. So, this time around Wesley and Woody are foster brothers are both transit cops working in the subway stations in New York. They are terrorised by a psycho (Chris Cooper) who attempts to burn the ticket booths and the people inside them. When conflict between the pair and their boss results in them getting fired one brother decides to redeem himself by robbing his boss' money train that collects all the money from the ticket booths across New York. The heist plot doesn't really even pick up until the third act.

I was actually a little surprised that Woody Harrelson was the side of the duo that was considered the "fuck up" and Snipes is actually the straight man. Woody has had some struggles with gambling in the past and he's piled up a lot of debt. Snipes tends to do whatever he can to keep his brother afloat. Woody's character is still charming enough to be likeable even if he's fairly self centered. If I wasn't so invested in the two leads this would've been a pretty lame movie.

The pair are joined by a new female cop played by Jennifer Lopez in one of her earlier roles. Lopez is another highlight of the movie. Although the love triangle that forms between the three of them would be considered fairly stale by today's standards I still find Lopez's character to be interesting and she's able to carry her own weight as a cop. She's not just there to look good (although she does that well also). When the movie suddenly becomes a heist film Lopez somehow still remains on board with the two leads even though they basically become criminals. Chris Cooper's villain is really only a factor for 2/3s of the movie and is probably only in 2 scenes in the film. There was a lot more potential for him to be a far more interesting villain. His character did start a bit of controversy when there were some events where ticket booths were set on fire in the same way they were in the film.

If you're a fan of action movies, or either of the leads you'll probably find something to like in Money Train. I would've loved to see Woody and Snipes team up for one last movie while they were both at their peak. I don't know if I would call this movie underrated because its so messy, but its fun and that's what matters.