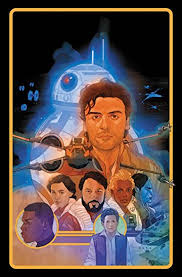 I haven't talked comics for a long time because they tend to take a lot of work every week, but Poe Dameron #26 is a landmark issue for the series and I really felt like I needed to talk about it. Even if its just a few short thoughts. This issue generated a lot of attention in the last few days as it shows us our first look at the gap between The Last Jedi and Episode IX. I was just thrilled by this issue from start to finish just because I wasn't expecting to get a story in this timeline. If you haven't read the issue and you intend to, expect a few SPOILERS. Proceed with caution.

So, the issue starts off on the Millennium Falcon right after the remaining Resistance members have left Crait. Rey and Poe have just met for the first time (a controversial contradiction in canon) and they become fast friends in this issue. This is the first time that the members of the Resistance have had any real down time since the start of The Force Awakens because The Last Jedi picked up right where it left off.

Most of the issue is composed of flashbacks while Finn, Rey and Poe are relaxing on the Falcon. There is still no word on where the Falcon is headed, which is fine, I'm sure we'll get that in one of the later issues. Poe just starts filling in the gaps about what happens while he was absent during The Force Awakens after he crash lands on Jakku and how he gets back to the Resistance for their attack on Takodana. This space was filled in a bit by the adaptation of The Force Awakens. I'm not sure if there are any contradictions to what was told in the novel and I don't really care, because it already conflicted with The Last Jedi.

Charles Soule is my favorite Star Wars comic writer right now and I've become a really big fan of his over the last year. His work on the current Darth Vader comic is nothing short of exceptional. I'm currently reading his first novel The Orcale Year and its one of the best books I've read so far this year. Expect some thoughts from me in the next few days on it. This Poe Dameron arc is going to have a really meaty story and I can't wait to get the next issue. I'm not sure I've ever been more anticipated for a comic like I am for issue 27. If you're a Star Wars reader this is one you shouldn't have to think twice about picking up.