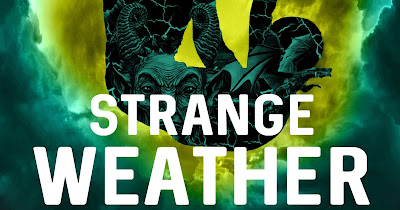 Strange Weather is written by Joe Hill, the son of legendary horror writer Stephen King. Its a collection of 4 short horror novels. This is my first experience reading a Hill novel. I've read a handful of issues from his comic series Locke and Key and while purchasing this collection I bought a copy of one of his novels called NOS4A2. Joe may have the same interests in regards to genre to his father, but he's certainly capable of establishing his own legacy.

Hill's method of writing characters reminds me a lot of his dad right from the first short story called Snapshot. I've heard some people online claim that this is the worst story in the collection, but its still quite solid if you ask me. It tells the story of a young teenager who gets terrorized by a man with a Polaroid camera that steals memories. It may not sound that scary with that description but I bet you'd be surprised. While the Polaroid camera may seem a little far fetched the story deals with some very real issues like dementia and with characters that I found myself on board with.

Next is Loaded, the story in the collection that is most set in reality and the longest story in the book. Hill said that the story originated after the school shooting in Newtown several years ago. The story covers so many important topics in today's society. America's fascination with guns is one, police brutality is another. The story focuses on a man named Randall Kellaway, who saves a mall from a shooter, but when Kellaway is portrayed as a hero in the media a reporter for a local newspaper sees the cracks in Kellaway's story and begins to dig a little deeper. The characters in this story were nothing short of fascinating. Even those that could be seen as villains. The local police chief Rickles, a man looking for a piece of the fame after the shooting when he really didn't much to do with it at all was one of the most impressive characters. I really felt like there was no hero in the story. Hill also uses a huge forest fire in the town to show the building tension. Finally, the story ends with a bang. I think Loaded probably the strongest story in the collection as well as the most timely.

The third story is Aloft which is basically Hill's story about a nightmare that seems to be quite common. Getting stuck on a cloud. Our main character makes his first attempt at sky diving and lands on a cloud that is solid. Shortly after losing his parachute he has no way to escape. He's surprised to find that this cloud has the ability to respond to his needs, but still needs to find his way off before he starves to death. Hill crafts the cloud into a bit of a metaphor for the young man's love life. The cloud is telling him that he's wasted time going nowhere in life.

The final story Rain cuts right to the chase. A Colorado town is taken by surprise when hard nail like rain begins coming down killing nearly anyone who wasn't sheltered. Scientists and Governments scramble to search for a explanation or at least another nation or group to blame it on which society quickly starts to crumble in the places effected. Its a post apocalyptic story and it really cuts to the chase. "The Rain" occurs in the first few pages of the book and everything that follows is just the fallout of the event. Its a good end to a really solid book.

If you're looking for a group of stories that weave together this isn't really that sort of collection. Even the title doesn't really even serve as a good explanation of what the stories are about outside of possibly Rain. I'm sure a fan of Hill's prior work will probably get swept up in this book and I think he's won me over and made me a fan. I'll probably explore some of his other work in the coming months.