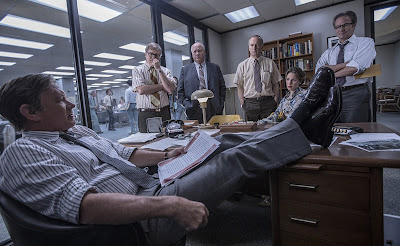 The Post was one of the movies from last year that I wanted to check out in the theater, but never got the chance to. So, unfortunately I was left seeing it this week after it was available for digital rental. Steven Spielberg assembled lots of great talent around him. I believe The Post is his first collaboration with Meryl Streep and I'm pretty sure its his 5th with Tom Hanks. John Williams is back to work with him for the gazillionth time too.

I'll be honest, I wouldn't consider myself a huge fan of Spielberg's recent work, which seem to have been called his "legacy films". Both Lincoln and Bridge of Spies were undoubtedly well made, but I have to admit that I was a little bored by both of them. I've already seen Ready Player One as well and a glimpse at the return of "fun Spielberg" may have given me a different perspective than it would've if I saw The Post first. Turns out that wasn't the case, after it found its footing The Post was excellent.

I've been excited for this movie ever since it was announced. It was produced amazingly fast with the announcement coming back in February 2017. Spielberg felt confident that the story this film had to tell was relevant right now and he was certainly right. The Post is a very timely project. The Post tells the story of the crew at the Washington Post in 1971 when secret documents regarding the war in Vietnam were leaked, despite heavy pressure from the White House to stop the publishing. The events of The Post were something that I surprisingly knew very little about. Even though you ultimately know what direction the movie will take in the end the stakes remain high.

I'm not an American, so I felt like I started this movie a bit behind the 8 ball. It implies that you already know some things about the state of the world in 1971. It just took me a little while to gain my bearings. If I was a history student I'd probably be able to pick up on this story quite smoothly. This is really example of a movie that came together like a well oiled machine. Full of a veteran crew that knows exactly what's expected of them and just does it. The film is well shot, well directed and well acted.

At the center of everything is Meryl Streep and Tom Hanks. Both are playing strong characters that are relatable and likeable. Streep is Katharine Graham, the first female publisher of a major American newspaper. Graham is struggling to decide what to do with the paper because she is surrounded entirely by men who don't treat her with the respect she deserves. She took control of the paper after her father and husband both passed away. The Washington Post has been a part of her life for a long time and she is reluctant to take risks because of the pressure from her peers and because she fears damaging the legacy of her loved ones. Those are struggles that we all deal with in life.

Hanks is Ben Bradlee, the editor of the paper and he's motivated to post these secrets almost from the get go. He knows that he has a right to publish and he's willing to accept the consequences of his actions. Ben had some history with JFK and in a great scene between he and Streep he talks about how his affiliation's with people in power shouldn't influence the truth.

Most of the supporting cast involves people who have more history in TV than film. That doesn't make them any less experienced. Even the people who only have a few scenes make an impact in the short amount of time they're involved. Bob Odenkirk, Alison Brie and Tracy Letts are probably the most notable of the large supporting cast.

The Post is a very powerful story from start to finish and in the world where "fake news" is a common discussion point it feels right at home in this era. The people have a right to know the truth, its a story about doing what's right and what you have a right to do.