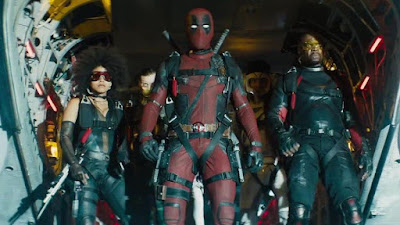 The first Deadpool is a movie I love and I think I love it more and more every time I watch it. I think that few comic book movie capture their character better than Deadpool does. Deadpool 2 is bigger in almost every way. I'm not convinced that its better, but I still had a really good time with it.

Deadpool 2 was announced fairly quickly after the release of the first movie and it was just a little over a two year wait for a sequel. The film's original director Tim Miller left the project and was replaced by John Wick co-director David Leitch. The budget of this sequel more than doubles and it feels more like a typical summer blockbuster while the first movie was mid-budget.

The titular character says himself, the first Deadpool is a love story, the second film is a family movie. With help from his friends Kolossus and Negasonic Teenage Warhead Deadpool becomes a temporary X-Men trainee. I don't think its much of a spoiler to say that it doesn't last long, but during his time in the X-Men he meets a young mutant named Russell (Hunt for the Wilderpeople's Julian Dennison) who has been tortured by the headmaster in his orphanage. Russell suffers from anger issues and he's more than capable to cause damage when he's angry with the ability to shoot fire from his fists. Deadpool is forced to square off with a killer from the future named Cable who enters their time in order to kill Russell before he kills his family in the future. Deadpool tries to protect Russell by creating his own team of mutants to stop Cable. He calls them X-Force.

I found Deadpool 2 to dive a little deeper and be a bit more ambitious with the Deadpool character. He's able to break the wall a little more and he does some more innovative things this time around now that the filmmakers can afford to be a bit more ambitious. Ryan Reynolds is expectedly great as Deadpool with steady jokes and just a great grasp on the character that he just seems to love playing. For as wild as Reynolds gets there are still some solid emotional moments. Morena Baccarin's love interest is still a really important element of the story and their relationship still remains one of the more engaging superhero romances.

Adding Leitch becomes very obvious during the action sequences. Leitch has established a reputation pretty quick for great hand to hand combat and it continues to impress in Deadpool 2. Cable and Deadpool do a lot of fighting in close quarters and the rest of the cast seems very dedicated during the stunts.

Of the new cast members my favorite would have to be Domino, who was played by Atlanta's Zazie Beetz. Domino's superpower being luck was a good source of gags and Beetz had some really great chemistry with Reynolds. Her action scenes are as strong as any in the film too. Its a shame that they couldn't give her a bit more to do. I was so impressed with her that I'd be okay with seeing Domino get her own film someday. I'm guessing she'll be back for X-Force and that can't come soon enough. It really does look like anyone involved in Atlanta is a top tier talent.

Information about Cable is a bit hard to come by. I would hope that he is at the forefront for the upcoming X-Force since he is supposed to be the leader of X-Force. I do think that Cable and Deadpool make a really fun screen pair when they share some time together. There is still more than enough time to build that in other movies. Cable is undoubtedly a good straight man.

I didn't really appreciate the excessive call backs to the first movie. Look, I love nostalgia as much as anyone, but its not like the first Deadpool film came out 20 years ago. Its only been 2 years. Most of the references they make to the first film aren't really that funny and they are a little too on the nose for me. Although Deadpool 2 makes up for it with some expected twists. Especially one that is both shocking and absolutely hilarious. The only other real issue I have with the film was that TJ Miller just seemed a little bit off in this entry. In the first film TJ Miller's part seemed to be largely improvised and this appears to be more of the same. Unfortunately these jokes don't work out as smoothly.

If you were a fan of the first Deadpool I'm sure that you'll find something to like in Deadpool 2. Its got more of a blockbuster feel than the last one, but its still a pretty ideal summer movie and will probably be one of the strongest we get this season.