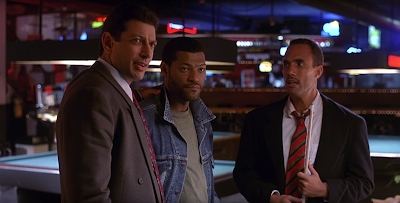 Deep Cover was directed by character actor Bill Duke in one of just a handful of films he directed. Duke is famous for appearances in Predator and X-Men: The Last Stand. The film is defined by the era that it takes place in, being the early 90s, but its still surprisingly relevant. You can view this movie and be entertained by the surface story, but also be surprised by the depth of themes.

Deep Cover takes a neo-noir direction, with a little bit of Blaxploitation mixed in. Laurence Fisburne takes the lead role and watching a film like this makes me a little sad that he didn't get more of a chance as a leading man. Fishburne also provides some interesting narration. I guess in fairness he is an exceptional supporting actor, probably one of the best in the 15-20 years, but he's proved worthy of being a leading man as well.

Laurence's character Russell Stevens is a cop, and was motivated to become a cop ever since he was 10 years old and saw his drug addicted father get gunned down after a failed liquor store robbery. From that point one Russell swears to be nothing like his father. Twenty years later Russell draws the attention of a DEA agent played by Charles Martin Smith and is offered the chance to go undercover into the LA drug scene. Russell becomes John Hull and the line between cop and drug dealer really starts to blur. He is told to work his way up the ladder to make it to the area's biggest drug importer.

Russell develops a combustible relationship with David Jason, a lawyer who is deep in the drug scene as well. The pair do develop some trust, but one false step will be all it takes to destroy everything. Goldblum is his best Goldblum and he and Fishburne become a very watchable pair. Goldblum's character delves a little deeper into insanity and becomes more and more entertaining through the film.

At the start of the film Fishburne has a very strong moral code, but his dive into the drug scene really forces him to bend it. The temptations of a life of crime start to look more and more appetizing. He is forced to sell drugs to pregnant mothers and people who share similarities to his own father. As he starts to develop more credibility in the underground he begins to acquire more assets and more power. Deep Cover is a film that shows how easily a man can be corrupted. Even the best of us, but if Russell wants to achieve the greater good, he's got to do a lot more bad.