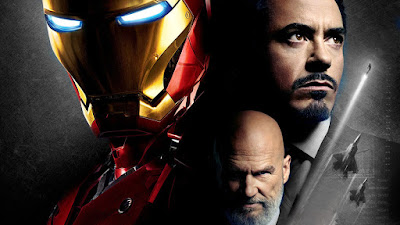 When all was said and done I was really pleased with Avengers: Infinity War. At this point all the Marvel films are explored almost to death, but that doesn't stop me from starting a Marvel retrospective series. Obviously Iron Man is a pretty good place to start.

I really feel like there is nothing new to say about Iron Man and now its hard to look at the film as an individual movie and not as a launch pad for the Marvel Cinematic Universe as a whole. I find it interesting that people look back on this film and consider it to be a bit of an underdog. Is it true? At this point I'm not really sure, but we all love an underdog story.

Sometimes, when I look into the behind the scenes notes I wonder if Marvel really was sure what they were doing during the production of Iron Man. Apparently, the film had no real firm script while filming. To be honest, I had a bit of an idea who Iron Man was when I approached this film, but he wasn't exactly among the cast of elite superheroes. I knew who Batman, Superman and Spider-Man were and I enjoyed their films, but Iron Man. For me that was a deep cut.

To this day, the best decision Marvel ever made was one of their earliest. Taking a gamble on Robert Downey Jr. couldn't have worked out any better for them. Now that time has passed it looks like Jon Favreau is starting to get a bit more credit for his role in this production. He was the director of course.

Iron Man focuses on billionaire and weapons developer Tony Stark. A man who profits off the use of missiles and many other weapons that are used to slaughter thousands. He's designed all of these excessive weapons all while living a very sheltered life far away from all the damage his inventions cause. While demoing some new missiles in Afghanistan Stark is kidnapped and forced to build his missiles for the other side knowing full well that they will kill him once he's done. He is able to escape thanks to suit of armour that he is able to build while in captivity. When he returns home he decides to build another suit of armor with his virtually endless resources and intelligence.

At this point enough has probably been said about Robert Downey Jr. in this movie. He's nothing short of fantastic. He brings the character from the comic book to life while also making it his own. It could be the mirroring between Stark and his own personal life, but regardless it works. Stark is so great as Iron Man that now he's retrospectively inspired the comics that the film is based on. If you read an Iron Man comic now, its Downey's Stark.

Stark develops so smoothly over the course of the film. Starting out as a typical spoiled rich boy and slowly growing into a selfless hero. Jeff Bridges plays Stark's mentor and the eventual villain of the film Obadiah Stane. A former friend of Tony's father Stane is forced to clean up the mess that seem to follow all of Tony's brash decisions, but when Tony digs a little deeper he realizes that Stane is involved in a darker side of the company that he never knew existed. Bridges could be the start of Marvel's supposed "villain problem". He's far from the worst one, but Marvel seemed to take the easy way out and focus on the hero and now Stane's motivations aren't exactly crystal clear, but they are suitable to move the plot along. It may be that Bridges became a bit of a template for other villains down the road.

Prior to Black Panther I thought that Tony Stark and Pepper Potts were the only good Marvel romance. Every other one seems tacked on and unnecessary. Obviously, every Marvel character has a love interest in the comics so it makes sense for them to be involved, I just find that few of them really work. Pepper and Tony's story still has some room for development at the end of the film. Even just Paltrow's willingness to remain on board the Marvel franchise even if she's given a glorified cameo makes me very happy. Their relationship will probably never get explored like it was in the Iron Man standalone films, but its nice to know that creators continue to add to their story.

Terrence Howard's performance as James "Rhodey" Rhodes is a bit underappreciated now because Don Cheadle has moved into the role and reprised it several times now. Sometimes I forget that Howard even played the character at all. Rhodes is a loyal friend to Stark, even when he's not on board with his plans. He frequently sticks his neck out and damages his own reputation to help his friend.

I've watched Iron Man 2-3 since its release at home and it still feels quite flashy to watch on the small screen. Favreau's action is very well filmed. The third act seems to be where people's problems arise with this film. Its common in most superhero movies. Its the time delegated to two huge robots smashing each other to bits, but the conflict between Bridges and Downey feels real. They are able to pull off an implied history.

When all is said and done Iron Man and Batman Begins probably sit at the top of the list when considering origin stories.

Does Iron Man deserve all the love it still gets 10 years later? Probably.