Lando: Double or Nothing #1: Comic Review 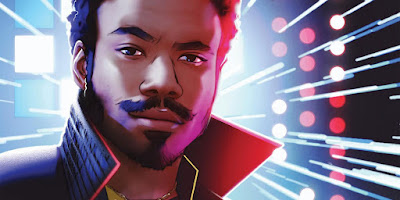 Solo was just released this weekend for the world to see and one of the better received elements of the movie was Donald Glover's portrayal of Lando Calrissian. Lucasfilm is following the film up with this new comic Lando: Double or Nothing. The comic is said to lead into his appearance in Solo.

Lando already got his own miniseries written by current Poe Dameron and Darth Vader writer Charles Soule back in 2015 when canon was still pretty young. This comic is the first time that we are seeing Donald Glover's version of the character on screen. First off, the look of Lando in this comic is spot on and as the description says Lando seems to be even more cocky now than he is in the films.

Lando is in the middle of considering some new renovations on the Millennium Falcon when he meets a young woman named Kristiss who is looking to break her father free from the planet Kullgroon where he has been imprisoned by the Empire. Kristiss approaches Lando because of his reputation as the best smuggler around. Lando is forced to take the job because of his debt to an alien that he ripped off in a card game. The comic showcases a young Lando who is still very far away from joining the Rebellion. He's still just in it for himself and doesn't want to do anything that will get the Empire on his back.

We get a bit more canon filler. In Solo we see Lando recording something known as the Lando Calrissian chronicles and we now learn that he plans to write a book. Lando's legacy seems to mean a lot to him considering that he is still a pretty young man. Writer Rodney Barnes is actually a screenwriter who is probably most famous for his work on The Boondocks. Barnes seems to have a solid grasp on the character and has probably either read the script or seen the movie a little early so he could build this comic.

This issue mostly just builds up the adventure that will come over the course of the series. L3-37 has a role to play and I was actually a bit more impressed with her in this short comic than I was for her in the films. That was the case with Last Shot as well. Still, this series is off to a great start and it gets a big thumbs up and a recommendation from me.