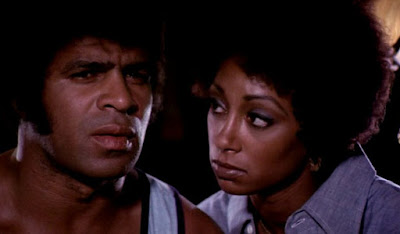 I don't have much history with the Blaxploitation films. I've seen a few of the more modern films and the hilarious parody Black Dynamite. Black Shampoo could be the first film that I've seen from the era where the genre was most popular, the 70s.

Black Shampoo is inspired by the Warren Beatty/Hal Ashby film Shampoo, which was released just one year earlier. The main character, Jonathan Knight appears to have taken a lot of inspiration from Warren Beatty's character. Knight (often referred to as Mr. Jonathan) is the most popular women's hairdresser on the sunset strip and he seems to have acquired a reputation as lover as he tends to have sex with his clients during their appointments.

Mr. Jonathan's new receptionist has a history with the mob and when they decide they want her back Mr. Jonathan's salon ends up destroyed and two of his employees are roughed up. He decides that he has to stop them for good.

Its hard to believe that Black Shampoo feels long at just 82 minutes. There is an unnecessary amount of filler thrown in there. This filler is mostly composed of music sequences and lots and lots of extended sex scenes. Mr. Jonathan hooks up with about a half a dozen women by the time the film is over, maybe even more.

The actual story and characters are very thin. John Daniels, who plays Mr. Jonathan at least looks sort of cool. I don't think that any performance really stands out from the pack, but the low budget feel doesn't do this movie any favors.

There really isn't a whole lot to say about this movie. I just felt like I should just because I found it interesting for as weak as the movie is.