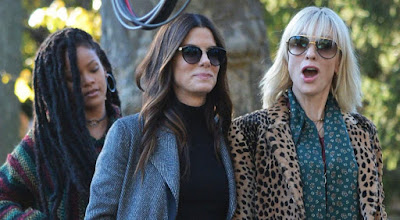 Ocean's 8 is a film that serves as a gender swapped remake and a reboot of the Ocean's franchise. It does take place in the same universe as the Steven Soderbergh Ocean's Trilogy, which was originally a remake of the old Frank Sinatra film from the 60s. Sandra Bullock's Debbie Ocean is the sister of George Clooney's Danny Ocean from the popular series.

Debbie Ocean is fresh off a 5 year jail sentence where she took the time to plan a heist of their own. She teams up with her old partner Lou (Cate Blanchett) who helps her build her own crew to steal a diamond necklace that is worth about a 150 million dollars.

This movie is definitely fun to watch, its not too long and its kept my attention the whole way through. The cast look like they're having a hell of a time and some of that rubs off on the audience. The rest of the ensemble includes Anne Hathaway, Sarah Paulson, Helena Bonham Carter, Mindy Kaling, Rihanna and Awkwafina. I thought the stand out of the cast was actually Anne Hathaway who plays a self centred celebrity, but still manages to keep some of her charm and be likeable. Sandra Bullock is obviously still a very capable leading lady too.

As usual, these large casts generally end up sacrificing a lot of character in order to give everyone an equal amount of attention. Debbie Ocean is the most explored member of the cast and even then all we know is she's Danny Ocean's sister and she just got out of jail.

Unfortunately, the lack of a real conflict hurts this movie. The crew basically just comes to together, they plan their heist and then they execute it. There isn't much resistance in their operation either. There is no conflict within the group either. Its still entertaining, but it had potential to be more.

The movie is helmed by Gary Ross, director of The Hunger Games and for the most part I think he did a solid job. He just doesn't have the definitive style that Steven Soderbergh brought to the George Clooney films. I would've liked to have seen him come back or they could've brought in a female director.

I appreciated that there was no shameless sequel tease. It starts and ends very cleanly, even though I think it was lacking some elements I'd be completely fine watching this cast come together again in a sequel. I just hope they can make some adjustments and maybe bring a stronger director in the next time.