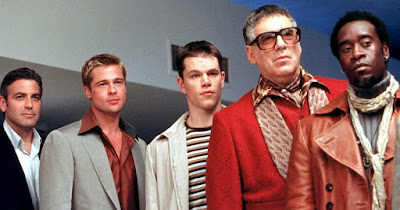 Ocean's 8 was pretty simple fun, but I've been surprised with how long its easy going fun nature has stuck with me. I was dazzled enough by it that it made sense to go back and view the Steven Soderbergh Ocean's Eleven, the first remake/reboot of the franchise. Its been years since I watched the film, and I hardly remember anything that happened in it. Upon second viewing I was surprised with how well this movie still holds up and how fun it still is.

I don't remember really loving this movie the first time I watched it. This rewatch has improved it in my eyes. I read that Steven Soderbergh set out to make a film that was "pure entertainment" and I feel he did. I would also say the same thing about his heist film from last year Logan Lucky.

Ocean's Eleven is actually a remake of an old movie from the sixties featuring the Rat Pack (Frank Sinatra, Dean Martin and Sammy Davis Jr. all appear) and I've never seen it because I heard it wasn't really anything special. I have no idea how closely this remake follows the original, and I don't really care. I'm sure I'm far from the only one who hadn't seen the first movie.

However, much like the original Ocean's Eleven features a cast of some of the biggest movie stars of the era at the peak of their powers. Several cast members are believed to have taken a pay cut in order to keep the production budget from getting too ridiculous. George Clooney serves as the ringleader of the whole group playing Danny Ocean, a known criminal who is fresh out of prison and immediately violates his parole and heads to Las Vegas with his partner Rusty Ryan (Brad Pitt) to assemble a crew to pull off the ultimate heist. Their crew is composed of several other familiar faces including Matt Damon, Carl Reiner, Don Cheadle (who is uncredited for some reason), Casey Affleck, Scott Caan, Bernie Mac and Elliott Gould.

All the motivation Danny needs to rob 3 casinos in one night is the fact that his now ex-wife Tess (played by Julia Roberts) is now with the owner of all 3 casinos. Andy Garcia plays the villain of the film and he develops a really entertaining rivalry with Clooney. I would argue that Garcia is the best performance in the film.

There isn't a lot to add to the characters in the film. They all have their little quirks. It seems like Brad Pitt is eating in more scenes than he isn't and each actor's persona is really able to elevate their character. Steven Soderbergh's style really makes an impact too, which was something that was missing from Ocean's 8. The story moves along like a well oiled machine and nothing really feels unnecessary. Its a film where all the characters seem to be very intelligent, but you don't have to be intelligent to watch.

Much like Logan Lucky after it, this looks like a film that was really fun to make. I can understand why they came back to the well and made a trilogy out of it. I'll likely return to review the other 2 movies in this trilogy as well, I'm pretty sure they get worse from here, but with this much star power and a good director its hard not to have a bit of fun.