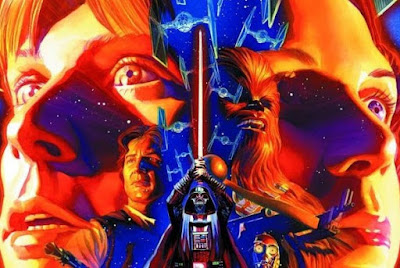 While I certainly fork over my fair share of money for Star Wars comics it never really seems like I have enough to read. Now I guess I felt it was time to jump back into some of the old comics. This Star Wars series isn't really that old as its the last series written under the Dark Horse banner before Disney bought the property and Marvel began writing Star Wars comics again. Marvel seems to have the rights for them so they are all available on Marvel Unlimited if you're a subscriber you can read them essentially for free.

In Vol. 1 Brian Wood sets his story is one of the more ideal locations for a Star Wars story. Right in between A New Hope and Empire Strikes Back. Then he has access to all of the characters that we know and love. As expected from the title this whole arc basically begins right after the destruction of the first Death Star.

Darth Vader has found himself demoted now that he had failed to protect the Death Star and the Rebels were forced to leave and find a new base of operations. I found that Wood is able to make some impressive insights with the characters since the destruction of the Death Star is still so fresh in all of the characters minds.

The arc is able to balance several storylines. Leia and Luke spend a lot of time together while Han Solo and Chewbacca are spending their time on their own special mission from Mon Mothma herself. Leia is trying her best to keep those under her in check even though she is still struggling with the complete destruction of her home world of Alderaan. Her mother and father obviously came with it. She hasn't really gotten a free moment to truly grieve and while she's still the capable Princess Leia we know there are some cracks in the façade.

I'm sure some people would considered Wood's portrayal of Luke Skywalker to be just a bit off, but I actually thought it was really clever. Destroying the Death Star on basically his first mission as a member of the Rebel Alliance seems to have gone to his head a bit. He seems to be a little less responsible than Leia and Wedge Antilles are at this time. He's hanging around with girls and possibly making Leia feel a bit jealous (remember they don't know they are related yet). Leia and Luke are still trying to find a way to work together since they still hardly know each other.

Han and Chewie's mission is more of an action oriented story. They have Boba Fett and Bossk on their trail who can either hand them off to Jabba the Hutt or Vader. We don't really get any real closure to their story by the end of the arc.

Again, this series only lasted for about a year and a half since Disney took control and rebooted all of the canon, so I was a bit surprised with how many similarities this comic has with the Marvel series that came after it. A lot of the moments from the first movie still tie in heavily to this story.

This is a great arc to start off with if you know very little about Star Wars outside of the key characters. Obviously the downside is that these comics are no longer canon so they are probably more suitable for hardcore fans who are looking for more Star Wars material outside of canon.