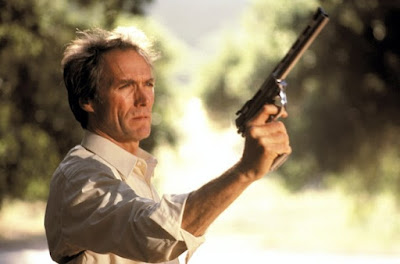 Sudden Impact was the only Dirty Harry film that Clint Eastwood chose to direct himself. It was also the highest grossing film in the franchise, after the longest gap between sequels. At this point I'm sure if Sudden Impact is the weakest I've seen in the franchise so far or if that title belongs to The Enforcer.

Much like some of the Dirty Harry films that came before it Sudden Impact deals with subject matter that was relevant at the time. Harry is investigating a gang rape victim who decided to get revenge on the people who raped both her and her sister, who is left comatose after the event (which seemed to be a bit of a cliché at the time.) While investigating the case Harry unknowingly gets romantically involved with the killer.

Sudden Impact is the last film of the Eastwood/Locke romance. Eastwood's then-girlfriend Sondra Locke appeared in 6 films with him and this film was the last one. Locke plays the film's antagonist and nearly shares the spotlight with Eastwood (which was really uncommon). I haven't seen all the films that she did with Eastwood, but I find more often than not I consider her to be a bit of a weak actress. I don't think she's really anything special here either, but the character she's playing is more interesting than Harry is. We can at least empathize with the character because of the hell that she's been through. Valuing the rights of the criminals more than the rights of the victims is a hot topic even today.

At this point, we all know what sort of character Dirty Harry is. He basically spends the first half of the movie investigating and fighting with his superiors, most noticeably Pat Hingle. Bradford Dillman is supposedly in this film too, but I honestly don't remember seeing him at all. The "go ahead, make my day" line originated in this movie and that may be one of the sole reasons its memorable at all today.

Most Dirty Harry films also have to have a prologue scene of his slaughtering a few small time criminals. Its present once again here and has no connection to the story. It seems like these movies feature the same character, but they don't really reward any of the people who have followed the series by bringing back other characters. Each of these films introduce Harry's mentality about justice and then he's thrust into a test. I feel like I did like The Enforcer just a little bit more than Sudden Impact because things are a bit more concise. Harry gets a new dog that looks cute, but when all is said and done he doesn't really matter.

The 4th Dirty Harry film is worth watching just to see Eastwood kick ass once again, but its not in competition for the best in the series.