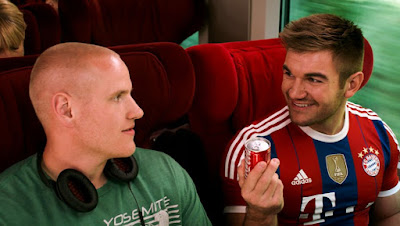 Clint Eastwood's recent films are pretty hit or miss to me. Sully was probably his strongest in a while, but The 15:17 to Paris is probably one of the weakest of his career. Eastwood has established a reputation for being a fairly efficient filmmaker. He's far from a perfectionist and doesn't bother spending a lot of time of several takes. His latest is a bit more experimental than you would expect from him in regards to casting, but it still ends up being a total misfire.

Like most of Eastwood's efforts lately this film is based on a real event, when 3 American friends stop an attack on a train in Paris the terrorists had possession of enough ammo to kill hundreds. In a ballsy move the 3 heroes (Spencer Stone, Alek Skarlatos and Anthony Sadler) are cast as themselves and they end up being one of the main downfalls of the film.

I feel like this movie would've been more effective if it was executed similarly to United 93 which also had some of the cast playing themselves, but this movie spends more time than it needs to on a origin story for these 3 people and only one of them really gets any exploration at all. The actual incident only takes up about 20 minutes of the runtime, and its probably much less than that.

An unexpected amount of time is devoted to our 3 heroes lives as children and the children's performances are pretty weak. He's proven to be capable when working with kids in the past, but he just doesn't seem to be able to handle them here. Judy Greer and Jenna Fischer play two of the kids' mothers and neither of them seem overly comfortable in their role either. Then we eventually flash forward to the men as adults, but these are just people living relatively normal lives and there really isn't anything going on to keep the audience interested.

Of the trio Spencer Stone is the person who gets the most exploration. I'm sure Eastwood was smart enough to see that he had the most potential of the 3 and decided to make him the focus. Stone is still far from a capable actor, but the other two are far worse. Stone is portrayed as a generic patriot, who is so predictable that he isn't the least bit interesting.

The only really solid redeeming quality I have is that actual sequence during the incident which is done fairly well although it starts and ends very quickly. The film has good intentions, but is just such a misfire overall. There are plenty of stories about every day heroes that are told effectively. This just isn't one of the pack. It would be in the conversation as one of Clint's worst directorial efforts ever.