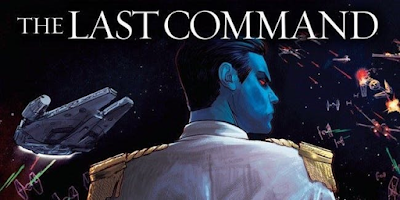 The Last Command is the final novel in Timothy Zahn's Thrawn trilogy, the series that essentially launched the Star Wars expanded universe. They are the most beloved and popular Star Wars books to ever be released and its viewed as an alternative to the sequel trilogy for some fans.

This book starts and gets the reader immersed in the story right from the start. Only a month has passed since the conclusion of the last book and the whole series takes place about 5 years after Return of the Jedi. Thrawn has finally gained the upper hand on our heroes and his Empire has started taking over planets. Thrawn continues his uneasy partnership with insane Jedi clone Joruus C'Boath, who met Luke Skywalker for the first time in the last book Dark Force Rising. C'Boath still hopes to train Princess Leia's unborn Jedi twins, who will soon be born and Thrawn is still promising to get Leia and her twins to him.

The Empire has gained an edge thanks to reacquiring the ability to clone and they are able to produce them at a much quicker rate than ever before. In no time they have more than enough man power to run their brand new fleet effectively. Luke Skywalker is forced to find the machines that have given the Empire such an advantage and destroy them before they take over everything. A new clone war could be coming and even the people on the outside may have to join the conflict to try to stop more suffering from war.

One of the things I really appreciate about this trilogy (and I've said the same thing about Chuck Wendig's Aftermath books in new canon) is that you approach it because you want to see what the classic characters are up to in the years after Return of the Jedi, but then you're won over by Zahn's new characters. Its builds and builds to the point where I may have been more interested in Mara Jade and Talon Karrde than I was another other characters in the book. Karrde, who had asserted himself as neutral in the previous books was forced to pick a side. Karrde could be compared to Han and Lando in a lot of ways, but the storyline still works. While he doesn't completely devote himself to the cause he's still a character that I could really get on board with, even if he still wanted to keep one foot in the smuggling pool as well.

I found that its this book where Thrawn really starts to shine. He's taken several small victories from the Rebels and has a plan that no one on the other side seems to be able to figure out. He played the long con and now he's taking over the galaxy very smoothly and very quickly. What I continue to find so fascinating about Thrawn is that he's no where near as violent as Palpatine and Vader. He's far from evil, he just happens to be on the other side of the conflict. He's not driven by rage and runs an Empire that is far more efficient than it was under Palpatine. Plus, he always seems to be one step ahead of everyone. The Last Command could be the book in the series were his genius reaches its peak.

Mara Jade is still insistent on killing Luke Skywalker even though they were able to team up and break Karrde out of captivity in the last book. Leia and Han share a bit of time with Mara and their relationship with the other members of our main cast make her that much more interesting. Mara is possibly the strongest character in the book this time and she gets a lot of time to shine in the final pages.

Zahn continues to be capable of balancing several solid storylines while weaving them together. Plus, this is the end of the trilogy so we all expected the big ending and he delivers. The series continues to effortlessly tie in to the original trilogy too. He does make a few odd choices. There is one twist that is unveiled towards the end of the book that didn't really need to be there. There was already enough conflict between Thrawn, C'Boath and our heroes.

Having just finished Last Shot it was interesting to see Han Solo and Princess Leia dealing with similar issues to what they were dealing with in that book (although its part of the new canon and this book is not). Their children are about to be born and while their struggle to be great parents isn't as heavily explored as they were in Last Shot I couldn't help but compare. A lot of Luke's character has to do with Mara as they seem to spend a lot of time together in this book. When Luke needs to be heroic he is and he has his fair share of great Skywalker moments.

The trilogy concludes with the loose ends tied well together. I did feel like the book ends a little early as a lot of major moments happen in a very small span and I almost felt like the last chapter needed to review everything over again one more time. When all is said and done I don't think I am going to be a Thrawn Trilogy worshipper like some fans are, but I respect it as a really solid work in the Star Wars galaxy. Its certainly worthy of Star Wars and I'm glad that these books still get attention today, because they deserve a lot of credit for building a Star Wars universe outside of the films.