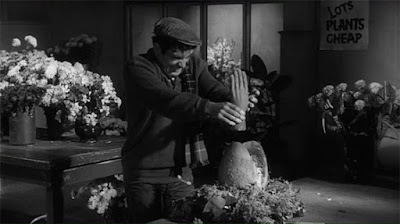 For Roger Corman day of Junesploitation I decided to check out The Little Shop of Horrors from 1960. Corman is now known as one of the most popular B-movie director/producers of all time. The Little Shop of Horrors came out earlier in his career before his career as a producer really got underway. The film is probably more famous for the remake that came in 1986 directed by Frank Oz that featured a lot of the comedic heavy hitters of the era.

The story focuses on a young man named Seymour (Jonathan Haze), who works in a small town flower shop. When his boss threatens to fire him Seymour decides to bring him a new plant that he seems to have discovered. The kicker is that this plant eats human beings and the bigger it grows the more hungry it seems to get. Seymour is able to keep the plant's eating habits secret as the shop seems to gain more and more business from the plant.

The Little Shop of Horrors basically gives me everything I want to see in a B-movie. The premise is certainly a little wild and the characters are just so goofy that they are memorable. Surprisingly, for a film that is nearing 60 years old it still quite funny. That's almost unheard of for a movie this age, especially one made on a shoestring budget like this one. The film was famously shot in less than 3 days. I can totally understand why Frank Oz chose to remake it, because there are a lot of great pieces and good laughs that could be improved on with a modern update.

While most of the acting is far from impressive the characters have a lot of weird little quirks that make them really fun to watch. Jonathan Haze's lead performance really isn't that good, but his character is a likeable klutz. Mel Welles plays Seymour's boss who is constantly talking about himself in the third person for some reason. One of Joe Dante's favorites, Dick Miller plays a customer who eats flowers.  Most of the female characters are hilariously cartoonish. There is are a pair of detectives that come in for a bit of a noir spoof. Jack Nicholson also makes a really fun appearance for about 5 minutes as a masochistic dental patient in one of the funnier scenes in the movie. The list really does go on and one. The highlight of it all is the hilarious talking human eating planet that gets more funny as the film goes on.

All in all I really enjoyed this movie and I'm sure its a pretty good starting point for anyone who is looking to dive into Roger Corman's huge filmography. Seeing as Amazon Prime has a few more of his films available I'm hoping to see some more of his movies very soon.