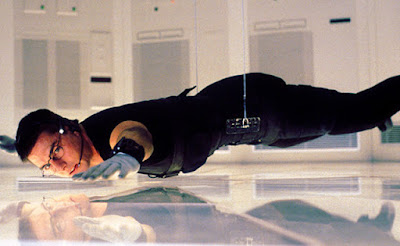 I'm normally pretty good at following most of the key franchises that are present in the movie world right now, but there are two big blockbuster franchises where I still have a large blind spot. One is the Fast & Furious franchise and the other is Tom Cruise's Mission Impossible series. Both are pretty beloved by their fans, but for one reason or another I've never been able to get attached to them.

The franchise's success sometimes leads me to forget that the film actually originated from the television series that ran from 1966-1973. Its also Tom Cruise's first attempt as producing a film. He's produced every entry in the franchise to date.

This most recent viewing of the first Mission Impossible is actually the third time I've viewed it. The film is obviously an action movie, but this movie really doesn't spoon feed you plot details. You can't zone out for 5-10 minutes and still expect to know what is going on with the movie. A lot of buildup happens in the first hour and then a lot of time is devoted to two really cool sequences to end the movie.

The franchise's staple, Tom Cruise plays Ethan Hunt, a professional spy who is accused of being a mole after a job goes wrong. Hunt must then dig deeper and try and find the real mole, all while being chased down by the organization who still feels that he is guilty. Just be prepared for things to get a bit more complex.

The film is directed by cult director Brian De Palma. Its one of the only movies De Palma has directed that really has a blockbuster feel. Still, De Palma's mastery of the action sequences is one of the main reason that the movie holds up so well. The heist scene where Cruise is suspended up in the air is really thrilling to watch and its impressive that so much can be done with very little dialogue or even noise. The finale isn't as impressive now as it was 20 years ago, but it is still very effective for its time.

Tom Cruise's first attempt at Ethan Hunt is still a memorable one. Cruise shows the dedication to the action that we come to expect from him even though he's entering his mid 50s now. There isn't a lot of character in this film, but it never really feels like backstory is really that necessary. Ethan Hunt has a bit of an implied rapport with his mentor played by Jon Voight.

In many ways, Mission Impossible is as much a thriller than it is an action movie. There are several pretty cool twists throughout the movie. All are done without getting too excessive. The movie teaches us to expect the unexpected quite early.

The cast is fairly big, but as far as I know Ving Rhames is the only other member of the cast that sticks around following the conclusion of this film. Again, character isn't a big factor in the film and Cruise and Voight are basically the only interesting characters and even they aren't particularly impressively written anyway. I've read into the movie a bit and it turned out the script was actually a problem for the film during filming. Emilio Estevez appears uncredited despite having a pretty sizeable role in the film.

Mission Impossible works really well as a standalone movie. When it ends it almost feels surprising that the franchise continued after this one film. Obviously the movie was a huge success, but it doesn't do any shameful sequel teases like we tend to see from modern blockbusters. Tentpole franchise movies have certainly come a long way in the 22 years since the release of Mission Impossible, but I do think that its still a pretty solid movie.