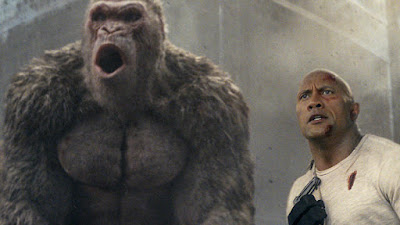 Dwayne "The Rock" Johnson teamed up with Brad Peyton again for Rampage. The pair have already worked together twice in Journey 2: The Mysterious Island and the very successful San Andreas. The film is based on the video game of the same name (which I'll admit that I have never played). We all know the reputation of video game films at this point. I'm sure many would agree that we have yet to get a good one. Rampage seems to have continued the trend.

I'll come clean and say that I watched this movie as a digital rental and not in the theater. A big blockbuster like this generally needs to be seen on the big screen in order for the audience to feel the full effect. I wasn't able to get to the theater for this one, but I felt like I had enough to say about it that I'd write a bit of my thoughts.

At this point we know the type of characters that The Rock tends to play. Words can not express how much I love watching the Rock. I've drank the Kool Aid and I'd agree that he's the biggest movie star out there right now and really he could be the only movie star on the planet that can appear in a movie like this and have as much success at the box office as Rampage did.

The Rock is playing the Rock, which is fine, but this time he's a former special forces solider turned primatologist (monkey scientist) who currently works at a wildlife preserve. He has a bond with an albino gorilla that he saved from poachers. The gorilla's name is George (as in Curious George..... HA!). He's able to communicate with George through sign language. George begins to change very quickly when he comes into contact with a pathogen that fell from the sky that causes him to grow very quickly and become vicious. There are also a crocodile and a wolf that effected by the pathogen as well.

Energyne, the corporation responsible for creating the pathogen begins to see it at work. They use a sound frequency to draw the huge and aggressive animals to Chicago where they hope to get a sample that will bring in even more money. This is the best I could summarize the plot without letting it get too out of hand. This should probably be enough to show you how nonsensical this movie is. The villains, played by Malin Akerman and Jake Lacy are both pretty bad, Akerman even more so. Their motivations are pretty stupid and there is no effort made to humanize them at all. The almighty dollar is all it takes for them to be stupidly evil.

It may be because I'm a big fan of him regardless, but I felt like The Rock was giving it his all here. Same with the very talented Naomie Harris, but apart from them there is very little good to say about performances. Jeffrey Dean Morgan is really overcooked. I'm not really that familiar with the Neegan character from The Walking Dead, but I can't help but feel like he's resurrecting the character again here. His character is one with the most potential to be fun, but he hams it up too much to be entertaining. Joe Manganiello shows up for about 5 minutes and then disappears for the rest of the movie for a scene that didn't really matter in the first place.

The screenplay is really lacking any good moments. There are a pretty large amount of cringe worthy lines. Its unbelievable how corny some of the lines are. Even an Oscar nominee like Naomie Harris can't say this stuff.

In the earlier scenes in the movie they try to introduce a bit of a friendship between The Rock and his monkey friend George, but even when they do it just seems a bit manipulative. We know this is fairly common with films that revolve around animals. Then they basically ditch that story for the whole mid section of the movie only to bring it back at the end when it hasn't earned it. This movie relies heavily on CGI and I would consider most of it to be fairly mediocre considering how much is used. The film really keeps to blow all its budget on the last few minutes and even the finale just isn't that impressive.

I'm sure I would've been able to forgive this movie if it provided a handful of fun moments. That was basically how I felt about San Andreas, but I wouldn't consider the two movies to be comparable at all in terms of quality. I just didn't care at all about anything that was happening in this movie. Its a blockbuster that just doesn't have anything new to offer anymore. It would've been way more popular 15-20 years ago.

Finally, when will Americans learn that shooting machine guns at large mutant creatures doesn't do anything? Every human character spends the whole movie firing bigger and bigger guns at these huge monsters and they still don't learn that it doesn't hurt them. Its a monster movie cliché that I've gotten a little tired of.