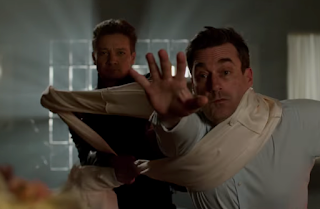 As many people have said, 2018 is one of the better years for mainstream studio comedies in quite a while. Game Night ended up being a very fun time and I've only heard good things about Blockers (which I will be watching soon). Tag had a really cool trailer and I decided it was worth watching. Although I was a bit slow to the party I finally saw it and I had a hell of a time with this comedy.

Tag is loosely based on a true story of a group of friends that have spent 30 years playing the same game of tag. Every year for the entire month of May the friends run all over the country trying to tag each other with a year of shame coming to whoever is "it" at the end of the month. Each member of the group seems to have had their share of shame, with the exception of Jerry (played by Jeremy Renner), who has eluded every single tag for 30 years. He has never been tagged. The remaining members of the group decide that its time to team up and end Jerry's perfect record. Jerry's wedding festivities just happen to be occurring on the final week of May so the rest of the group see that as their opportunity to pounce.

One thing that really works out to Tag's benefit is the cast. The film has a very well balanced ensemble featuring a lot of talent and some of them aren't always associated with comedy like Jon Hamm and Jeremy Renner, but they still pull it off so well. Jake Johnson has been one of my favorite comedic actors of the past five years or so thanks to his great work with Joe Swanberg. I'm not largely familiar with Hannibal Buress, but I'll admit that nearly steals the show here and finally you have Ed Helms, who I find to be hit or miss mostly, but this is the best he's been in a long time.

Each character seems to have their own little quirks. Buress' character seems to be the most like the real Hannibal with all the dryly delivered one liners. Johnson is somehow able to do several stunts all while keeping a joint perfectly placed in his mouth, etc. The chemistry among the group works and they really do feel like lifelong friends.

There are some standouts among the supporting players as well. Isla Fisher is at her craziest (and funniest) since Wedding Crashers which was really nice to see. Rashida Jones has a few scenes and its always nice to see her and finally, while he's limited to one scene Thomas Middleditch has a really funny bit.

Thanks of Jerry's over the top proficiency at the game of tag there are actually some pretty solid "action" scenes to the point where I would call this a bit of an action comedy. There some good slapstick in there too.

Enjoyment of Tag relies heavily on the audience relating to this concept. You can come to the conclusion that the idea behind this film is stupid and hate every minute of it. I happily bought in and from myself really invested in this story from start to finish. I thought there were some good themes about friendship and holding on to your youth.

Some people will not be able to get past the stupidity of the concept, but if you are able to I'm sure you can have a really good time with Tag.