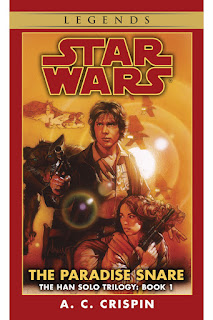 I've continued some of my exploration into the old Legends material. Now that Solo: A Star Wars Story has been released and we have the definitive canon storyline of Han Solo's young life, but now I thought I'd explore Han's backstory in the old EU. While its not the first material exploring Han Solo's years before A New Hope (that belongs to Brian Daley's The Han Solo Adventures) but The Han Solo trilogy by A.C. Crispin seems to have a bit more content. The Paradise Snare is the first book in the trilogy and its followed by The Hutt Gambit and Rebel Dawn.

Han Solo is a young boy who is basically orphaned and taken in by a man named Garris Shrike. Han is a part of a gang of pickpockets that serve Shrike in order to survive. Shrike is often cruel and beats the children if they don't follow his orders. After years of serving Shrike Han is finally able to break away from him, although Han loses his best friend in the process. He escapes to a planet called Ylesia where he hopes to become a pilot to gain enough experience to join the Imperial academy. He quickly discovers that the group he works for is essentially a cult whose members are forced to work processing spice.

This story doesn't take any time to get underway as the book immediately kicks off with Han plotting his escape from Shrike and reaching Ylesia were the inner workings of the planet start to become more and more clear. I really enjoyed the cult aspect of the story. It is really something that I hadn't seen in Star Wars, but its weird enough that it still feels right in the galaxy. The people who work among the cult are basically slaves who work for just second of pleasure at the end of the day. The pleasure becomes addictive and the workers get easily locked into the cycle. Luckily Han is able to resist the temptation.

A.C. Crispin is able to present Han Solo in a way that feels loyal to the character. He's still a bit naïve, but the charm that the character is known for is still there. I'd assume that Han becomes a bit jaded later on in the trilogy in order to become a bit bitter by the time we meet him in A New Hope.

There are some new characters introduced in the book that are easily likeable. There is a catlike alien named Muuurgh that Han befriends when he is forced to work with him. I'm sure that some people would consider the character a bit similar to Chewbacca, except Muuurgh is able to speak basic so the reader can understand what he is saying. Han develops a bond with Muuurgh and the pair become friends, but Muuurgh may have more of a code to follow than Han does. Muuurgh was a very loyal character and I hope to see him again.

When on Ylesia Han becomes attracted to a young pilgrim who lives her life referred to as pilgrim 921. Han is eventually able to break down her walls and learn more about this girl. Like many of the people on the planet she is addicted to the pleasure (referred to as the Exultation) and Han hopes to save her before its too late.

This book is not a particularly long one. Its just slightly more than 300 pages. For the most part it is pretty quickly paced. Although I did find that there were some sections in the back third of the book that dragged a bit. Then at the end there is a lot of key moments that are stuffed into the last few pages. Still I was impressed by this book because it doesn't try too hard to fill in all the mystery surrounding Han. Chewbacca isn't in the book at all and neither is Lando. It just focuses on the character. I'm sure those events will pop up later on in the series, but for now I didn't really miss them. Those boxes are probably going to be checked later in the series.

I would admit that The Paradise Snare deserves a look just because its fun to compare it to the canon story that we got in Solo: A Star Wars Story. I wouldn't go as far to say I liked this story more than the one told in the film, but its still an interesting alternate telling. I'm sure The Hutt Gambit and Rebel Dawn will be creeping up my reading list. Stay tuned for more reviews from the Han Solo trilogy.