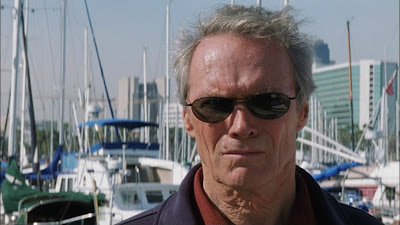 Here's another Clint Eastwood movie. One of several I've worked on this year in an effort to fill the blind spot I have for most of his work. Blood Work is actually Clint's last performance as a cop. Its an adaptation of a novel by famous crime novelist Michael Connelly, the creator of Harry Bosch. This comes from an era when a lot of Clint's directorial efforts were novel adaptations. It almost seems like he created a little unconnected trilogy for himself with Absolute Power, True Crime and this film because they all came out within a few years of each other.

Eastwood plays FBI agent Terry McCaleb, who is forced to retire when he has a heart attack trying to catch a serial killer. McCaleb has a reputation for taking on big cases and coming out on top and then getting to soak in the spoils of media recognition. He essentially blows his heart out trying to catch that last killer. He spends two years waiting for a heart transplant and when he finally get it his doctor (Angelica Huston) tells him its time to rest. He seems prepared to live out the rest of his life on a house boat with his slacker neighbor (Jeff Daniels).

That's when things get complicated McCaleb meets a woman whose sister was killed in a robbery and it turns out that McCaleb got her sister's heart. This forces him out of retirement to try and track down the killer since he basically owes his life to this woman.

Blood Work is consistently entertaining and considering how wild the story gets at time it probably wouldn't be as good if it wasn't in the hands of an experienced director like Eastwood. I've heard some people online say that they were able to figure out the direction the film was going pretty quickly, but I was in suspense for most of the movie. The case starts as a very small one, but things get much bigger in the third act making for a great ending. The script was written by Brian Helgeland, who had already had a pretty good reputation as a crime writer. He won an Oscar for LA Confidential and was nominated for another Clint Eastwood movie Mystic River.

Blood Work sees Clint Eastwood take a more kind hearted approach than usual. He appears to be a caring man and only takes on the case out of the kindness of his heart. Eastwood is so comfortable in this role and he's probably a bit more likeable, but the hardened badass comes out from time to time. Mostly when he's dealing with fellow cops.

Jeff Daniels makes a really big impact as McCaleb's neighbor Buddy. McCaleb enlists Buddy to serve as his driver while his pieces things together. He's lightly comedic, which isn't a stance we see him take that often post Dumb & Dumber. Still he pulls it off so effectively. They serve as a much better buddy duo than you may expect.

Blood Work is a good Clint Eastwood thriller that basically marked the end of an era. It doesn't exactly fit into his best movies, but its an entertaining watch on cable or a streaming service.