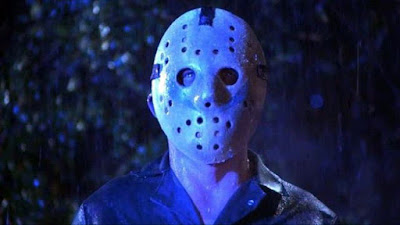 How do you follow up a film called The Final Chapter? I guess all it takes is a new film released a year later called A New Beginning. The fifth film is possibly the easiest one for me to talk about because of the direction the story takes. As much as I tend to enjoy the Friday the 13th movies most of them are at their best when they have Jason slaughtering a group of teenagers in entertaining ways. This film didn't quite deliver that. The reception to Part V still seems to be fairly mixed all these years later although I found that it improved a bit in my eyes after this watch. This is a hard film to evaluate without going into spoilers so if you haven't actually seen this movie it may be best to watch the movie and come back. SPOILERS ahead.

A New Beginning and Halloween III: Season of the Witch seem to have a similar path since their release. They are both outliers of their respective franchises because they don't feature the serial killer that made both of them famous, but over time fans have come to respect them even if they didn't bring them what they expected.

I probably only started watch the Friday films about 10 years ago when I got the first 4 films in a DVD pack and burned through them all in a day. I probably watch a couple of the films in the first 4 every year, probably at Halloween. I've only seen the films after The Final Chapter once. This is the first time I've seen A New Beginning since my first watch.

So, if you've seen The Final Chapter you know that Jason is killed by Tommy Jarvis (Corey Feldman) and this movie has the real Jason remain dead for the whole film, although the killer spends the whole movie dressed like Jason. Tommy Jarvis returns, although there had to be a recast. Corey Feldman appears in the first scene (a dream sequence), but he couldn't take on the full film because of his obligations to The Goonies. He gets replaced by a much older John Shepard. While its never said I'd guess there is roughly about ten years between films. Tommy is still haunted by the events of the fourth movie and hardly ever speaks.

Tommy is moved into a group home where several other kids about the same age as him are also staying when a killer begins to terrorize them.

When someone asks me why I enjoy the Friday the 13th films as much as I do I have a hard time giving the reason. It could be because they seem to be more rewatchable and fun than most slashers and while the characters aren't always very impressive I still find them sort of fascinating. While A New Beginning's characters don't rival the franchises' best I still enjoy a handful of them. Tommy obviously gets more attention as its rare that a surviving character returns in the franchise. There is a young black boy named Reggie that is fun to watch and then we get the short lived hillbilly mother and son duo that are so fun to watch because of the ridiculous performances.

The main issue with this film is the ending and I'm sure most people would agree. When the killer (who is dressed up like Jason) is finally defeated its revealed that the killer is actually the father of a young man is killed at the start of the movie. This death appeared to have driven him insane and he began to pose like Jason and continue his murders. The twist seems very sudden an unnecessary. I think it would've been so much better if it was actually Tommy who was continuing Jason's murders. The movie does hint that it was actually him that was the killer and it would've made sense after the ending we got in Part IV. The identity of the killer is just someone who makes one or two appearances before they are revealed as the killer. It impossible to figure out who the killer is because there aren't really any hints. Its fairly obvious that the killer probably isn't really Jason because he remains hidden for so much of the film. I'm not sure if this was an attempt to capture the mystery of the first Friday the 13th or what, but at the time it seemed like a very weird idea since Jason had become so heavily associated with the property.

It may be a slight attempt at the reinvention of the series, but still there is a lot of the franchises trademarks that continue. There are some pretty goofy performances. Including the ridiculous first death which is a dude getting killed with an axe for no reason other than being annoying. There is a couple who gets killed while naked and a few goofy characters that only appear in a couple of scenes just so the killer can slaughter them. There aren't really any standouts for performances. Most of them are pretty weak although there are a couple of performers that do good work.

Part V seems to have found its audience now. I've heard some fans say that they consider it to be one of the stronger films. I still prefer the first 4 to this one, and I may have to dive back in the films that follow because it has been a pretty long time since I've watched them. If I recall they're still fun, but not exactly great.