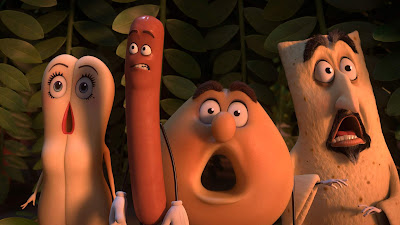 I revisited Sausage Party for the first time since seeing in the theater last night and I was shocked by how mixed the film was perceived. I remember thinking it was really really funny back in 2016 and anyone I knew seemed to really enjoyed it as well. Watching it again last night I may have laughed even harder. I can understand why it isn't some people's cup of tea, but as a fan of raunchy humor it works for me.

The trailer for Sausage Party was one of the funniest I'd ever seen and it got my butt in the theater seat opening weekend. The film is an obvious parody of Pixar films, most notably the Toy Story franchise. The film relies on a simple concept, that the food we buy at the supermarket are actually alive unbeknownst to humans.

Kicking off the movie with an original song tells the audience all that they need to know. All foods in the supermarket sit in their respective aisles and wait to be purchased by humans, who are referred to as gods. These gods will bring them to "The Great Beyond". When one jar of mustard is returned to the supermarket he tries to tell the rest of the market that their beliefs are not a reality and commits suicide rather than go home with another human. Most of the foods are quick to dismiss this claim, with the exception of a sausage named Frank (Seth Rogen) who roams the supermarket searching for the truth.

For me, all a comedy film needs to do is make me laugh and I'll appreciate it. Sausage Party does that. Its stuffed to the brim with ridiculous food puns and a few slightly off color ethnic jokes. Then of course the final act delivers a completely unnecessary but hilarious scene that makes it worthy of the hard R rating. Sure, some people will tire of watching food say fuck all the time and I think that's totally fair. Comedy is possibly the most subjective genre of all.

The film also has a mild commentary on religion with a whole supermarket believing a phony story and mindlessly following it since it is a fair better alternative than reality. I don't think its too heavy handed or anything. The first time I watched it I was too busy laughing to notice that subtext.

Seth Rogen and his producing partner Evan Goldberg get laughs out of shock value and basically being as offensive as possible. The laughs are consistent, but there are 2-3 scenes that are beyond hilarious. The cast is composed of many of the troop of actors that have worked with Rogen and Judd Apatow over the last decade. Kristen Wiig, Jonah Hill, Michael Cera, Paul Rudd, Craig Robinson. Bill Hader, etc. There are a few outliers with Edward Norton making an almost unnoticeable appearance and Salma Hayek playing a lesbian taco. Nick Kroll's literal "douche" villain is certainly a highlight as well.

Sausage Party is a film that is well aware of what its audience finds funny. If you haven't been on board with Seth Rogen in the past this is almost certainly not going to be the movie that makes you a fan. Laughing is good for you so if you think this is up your alley you should definitely watch it.