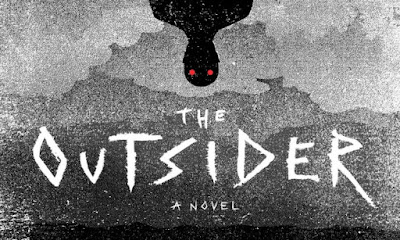 The Stephen King brand has only strengthened in the last few years thanks to some high profile adaptations of his King's work. I decided that it may be time to explore some more of King's work with his latest novel The Outsider. This is the first time I've read a King book since 11/22/63 which is one of my favorite novels ever.

King creates another new fictional town in Flint City, Oklahoma. A town where a young boy is found murdered and violated with all evidence pointing to one man, Terry Maitland. One of the town's most respected citizens who serves as a baseball coach, an English teacher and a father to two young girls. At first the case seems like a sure thing and Detective Ralph Anderson arranges a very public arrest of Maitland in the middle of one of his baseball games. Maitland claims he is innocent and has an alibi and his defense is able to build their own indisputable evidence to support his claim. How could the same man be in two places at once?

This conflict really makes for an interesting stalemate. You can feel some empathy for the characters on both sides because there is no black or white in this situation. Ralph Anderson makes some mistakes that really come back to haunt him later in the case and now he feels obligated to see it through to the end.  The mystery really did have me locked in almost from the start. There are a fair amount of characters, but it shows the impact that a vicious murder can make on a small town. The murder sets some more tragedy in motion. King is able to cover several different perspectives including the family of the victim, the cops/detectives that are trying to figure things out and Terry Maitland, his family and his lawyer who firmly believe he is innocent.

Ralph Anderson is probably the book's main character. Although he shares the spotlight with many other solid characters. While he's not perfect Ralph seems to be a very moral man who is more interested in finding the truth than he is being right while some of his counterparts just want to arrest someone for the crime and keep the town from panicking. Ralph was disgusted by the crime as Maitland coached his son. The murdered boy easily could've been his own son. Maitland remains firm and continues to claim his innocence eventually Anderson begins to show some doubt as well. Ralph's wife Jeannie ends up playing a larger role in the story than you would expect even though she's not a law official.

The book offers its fair share of unexpected twists. There is a point where the book seems to become more and more tragic and then the second half of the book takes a completely different direction than the first half. It gets to a point where it actually reminds me quite a bit of King's classic IT, but I won't say why. I wouldn't be shocked if there is a bit of King's Mr. Mercedes series in there as well, but I haven't read those books. The mystery develops quite nicely, but King's trademark horror has a place in this story as well.

King does revisit his Bill Hodges trilogy when Holly Gibney, who is a private investigator who I've heard had a part to play in that trilogy, joins the investigation as well. Holly is one of the stronger characters in the book and her involvement in this story made me even more interested in reading Mr. Mercedes. She's a sort of OCD type character, all while being likeable. She doesn't appear until the later half of the book, but plays a very key role in the story. It basically gets to the point where she is one of the co-leads. She and Ralph Anderson develop a nice mutual respect between them.

I wasn't that impressed by the finale offered in this book. I enjoyed the ride up until the final few pages, but I didn't find that the stakes were as high as I wanted them to be in. In some ways I found it to be a bit predictable. King is often able to stick the landing in most of his favorite works but I guess after all the twists that brought us to this finale I was expecting it to take a different direction. Still, he does a great job of tying up all the loose ends and bringing some finality to the story.

If you're a long time King fan or if you're trying one of his novels for the first time I think The Outsider still has a lot to offer. I'm sure if you're a fan of the Holly Gibney character it'll only help your reading experience. After a few years without reading King I think I'm going to have to dig a little deeper into his novels again.