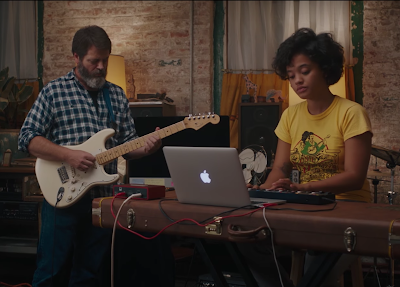 I always seem to have an extra layer of interest whenever music is mixed into the plot of a film. A good soundtrack can be a real strong point of a film in my eyes. I always like to see films where characters are songwriters. John Carney's (Begin Again, Sing Street) films have become some of my favorite movies, due in some part to the great original songs. I'm eagerly awaiting the release of A Star is Born in a couple of weeks for the same reason.

Brett Haley, who seems to be a relatively young filmmaker (no site seems to have his date of birth) but he's made a habit of working with some veteran actors so far. His first two feature films I'll See You in My Dreams and The Hero both featured lead actors that were well into their 70s. Now Haley has teamed up with another of my favorite actors Nick Offerman for Hearts Beat Loud. Haley already worked with Offerman in The Hero and now he's awarded him a rare lead role and he aces it.

Offerman plays Frank Fisher, a single dad whose record shop appears to be on its last legs. With his daughter Sam (Kiersey Clemmons) getting prepared to head to college in the fall he's beginning to think that his passion may have to take a back seat in order to get his daughter through med school. He seems to have passed his passion for music down to his daughter. They often spent their evenings jamming together and when they finally record a song and it begins to generate some interest on Spotify they decide to give music a shot with their own band.

This movie honestly charmed me to death. There are a handful of characters that are just so easy to love. The original songs may not really be in my wheelhouse but they were well written songs that I'll admit I liked. In some ways it felt like songs were almost written before the movie was and the characters were molded around the songs. The music they wrote was such a great fit for the characters. For the most part its just a cute story, but there is some nice romance and even some emotional moments too.

The dad/daughter relationship is an interesting one. Offerman is sort of the adorable music dork dad. He's basically a man who never quite grew up. He's had a dream of being a professional musician that never really worked in the past. Kiersey Clemmons almost serves as the voice of the reason. She tries to avoid getting too attached to this band or else it'll make leaving for college in the summer that much harder. She also has a girlfriend played by American Honey breakout star Sasha Lane. Lane is honestly just as great as anyone in this movie. There is one look she makes in this film that pretty much brought me to tears. In a refreshing move Sam is gay, but there is very little amplification to her relationship with her girlfriend. It just works. Her father doesn't have to go through this adjustment period. It seems that he may already know that his daughter is a lesbian and doesn't have to overcome and struggle with that knowledge. There are still so many movies where a gay romance has be kept secret from certain people or the characters have to feel guilt about being gay. This movie skips all that.

Toni Collette plays the landlord that Offerman rents the space for his record store through and they have a nice little chemistry as well. Their romance doesn't take away from the main story. Collette has already been so amazing this year in Hereditary its a nice palette cleanser to see her play a more mild character. Ted Danson basically resurrects Sam Malone as Offerman's bartender pal, only this time he's a pothead. Maybe he'll be the lead in Haley's next film. I'd be up for it.

You expect a film like this to have a fairly happy ending and for the most part it does, but not the typical ending that you expect. This movie is probably going to be among my favorites of the year because its got some weight, but it doesn't have much of an agenda. It just is what it is and I like what it is. Its currently sitting in the top 10 on my Letterboxd list of favorites for 2018 although I do still have a lot to watch this year.