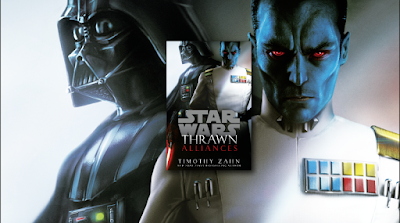 Timothy Zahn made a huge return to Star Wars novels last year and he got to do it with the character that made him famous, Grand Admiral Thrawn. Thrawn focused on the Chiss' journey to Grand Admiral. I didn't like the novel as much as some other fans did, but I was still very excited for Thrawn Alliances as soon as it was announced. This time around Thrawn gets to team up with Darth Vader for the first time in new canon. The book got off to a great start as it debuted at number one of the New York Times best seller list.

I was a little worried about reading this book as I've only completed about a season and a half of Rebels. This book takes place in between season 3 and 4. Thrawn is fresh off a failure and Emperor Palpatine decides to send him and Darth Vader on a mission to the planet Batuu, when he senses some sort of disturbance in the Force. As we already know Thrawn has already got some history with Anakin Skywalker as that was hinted in the first Thrawn book, but this time we get to explore more about their meeting.

So the book takes place in two time periods, both of them taking place on Batuu and featuring the same two beings. Thrawn and Anakin Skywalker first meet when Anakin is forced to go to Batuu when his wife Padme disappears. Thrawn is still a member of the Chiss Ascendancy at the time and as usual his motives for hanging around the planet are a bit unclear. Then flash forward to Anakin's transformation to Darth Vader and Thrawn's entry into the Empire. Sith Lord and the Grand Admiral are intentionally paired together to return to Batuu where the Emperor has sensed a disturbance in the force.

Its quite interesting to see how different the two beings change in the roughly 15-20 year gap between their two missions together. The Emperor seemed eager to send Thrawn on this mission because he's not convinced that he is 100% loyal to the Empire. His loyalty may actually still  lie to the Chiss Ascendancy rather than the Empire. There is a lot more friction between Vader and Thrawn than there is between Vader and Anakin since Vader has obviously given in to his hatred and may be a bit jealous about Thrawn's relationship with the Emperor.

Padme has a decent sized part to play in this book as well. I didn't always feel like her parts of the story were really that important, but it was nice to read about the character for the first time in a while. With a her own story coming in a book called Queen's Shadow next year it looks like this is a good setup for more exploration into Padme when that book comes out. This woman is Princess Leia's mother and Zahn does a good job of showing some parallels between the two characters. It was to get to revisit that character because she hasn't be a key figure in new canon yet. Although it looks like that day is coming.

I was pretty excited for this book despite not being a huge fan of the first Thrawn book and still I found this one to be pretty dry in spots. Its weird that the new canon Thrawn just isn't as interesting for me and it may because he's the protagonist in these books where in the old Thrawn Trilogy he was the antagonist and he was sharing the spotlight with other characters. He's considered the Sherlock Holmes of the Star Wars universe and sometimes his investigations just don't really draw me in. It also appeared that Vader was a little annoyed by his secrecy as well. I still really like the pairing of Thrawn and Vader. Even the conflict that developed between their allies was an interesting story. Its no secret that conflict was present within the Empire.

Another small problem that I had with this novel is the way they flashed back and forth through time. Zahn normally spent 2-3 chapters in one era and then when it changed I found myself a little confused about what was going on. This isn't exactly a new issue for Star Wars novels because I had a similar issue with Last Shot earlier this year. I would also say that I probably enjoyed the Thrawn and Vader story more than the Thrawn and Anakin's. Probably because its a bit more hostile. Anakin and Thrawn get along quite well. It just seemed like there was a bit more stakes to Vader and Thrawn's story, or I was just more invested in the mystery.

Batuu the planet where we spend a lot of our time. This is the location that Disney chose to display for a new attraction coming to Disney Parks next year. Zahn does develop Batuu a little bit, but it doesn't get to the point where it seemed like they were promoting the planet. If you were unaware of this while reading the book you'd never notice.

I was expressed by some of Zahn's reveals in this book. We know that Thrawn has already shown some affiliations to the unknown regions of the galaxy and we do get a bit more information about that. We learn a bit more about the Chiss Ascendancy as well. It continues to be a cool setup for a story that I hope to read or watch someday. The Star Wars galaxy needs to keep growing and Zahn is as good as man for the job as you can get.

I'm sure we will get another Thrawn book in the next year or two. Whether that book will round out the trilogy or not. If Episode IX ends I'm sure Zahn will be able to dive deeper into the Unknown Regions and I'm very excited to hear more.