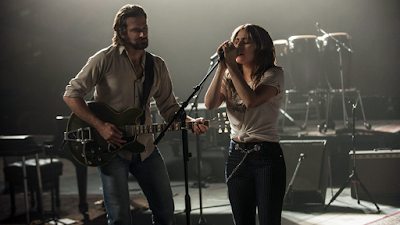 A Star is Born was an event. Its one of those films that everyone should see in a theatre. I live in a small town so its not often that I hear a lot of buzz about movies, but the good word spread like crazy in just a couple of days. I was very excited to see this ever since the first trailer. There's been a huge buzz surrounding this film since it premiered in some film festivals about a month ago. I think this film is going to make a massive amount of money and generate a massive amount of Oscar buzz.

The film is the directorial debut of long time movie star Bradley Cooper. I would only consider myself a mild fan of Cooper and never considered him to be a top tier talent even with his three consecutive Oscar nominations from 2013-2015. When A Star is Born was announced I couldn't even say I was interested. Why would any film need 3 remakes? That first trailer immediately put this movie on my radar though. Cooper and Lady Gaga have been everywhere in the past month promoting the film and it started to sink in that this film could be really special.

The story behind the film is a pretty simple one and not exactly much different from other films we've already seen. A middle aged burnt out rock star named Jackson Maine discovers a young singer in a club named Ally. The pair form a strong relationship almost immediately and when Ally begins to perform onstage with Jackson her career begins to gain steam while his alcohol addiction reaches a peak and his career begins a decline.

A Star is Born gripped me from the opening moments. The film opens Jackson Maine and his band performing the song "Black Eyes" and the sequence is so well shot and its such a great fit for a theater atmosphere. Cooper is such a perfect fit on stage and apparently he worked with Willie Nelson's son Lukkas (who wrote some of the music in the film) so he would resemble a real musician on stage. The sequence is very well shot and there continues to be some great camerawork from that point on. I'm sure cinematography will be one of the many Oscar nominations that it gets at the end of the year.

Cooper and Lady Gaga have an amazing chemistry and they are so well established in the first half that we can still stand beside them when their lives star to fall to pieces in the second half. I bought into their romance so quickly. They share a few lighthearted, funny moments and then when they got on stage they bring the house down. I would easily consider it to be the best performance of Cooper's career and an amazing debut for Lady Gaga.

I respected that both of the leads were able to do all of their own singing and both Cooper and Lady Gaga seemed to be heavily involved in most of the songs in the movie. This film is a great showcase for how talented Cooper is, and he's so excellent that he's able to match Lady Gaga, who probably would've stolen the movie if she was paired with a lesser actor. I've always respected Lady Gaga as an artist. I've never bought one of her albums, but any time that I happen to catch her performing she blows me away. Her performance in the film is one of a veteran actress. Its a once in a lifetime type performance and she absolutely kills it through all of the music thanks to her amazing voice.

Cooper and Gaga are obviously at the forefront, but the supporting actors are great when they are used. Sam Elliott plays Jackson Maine's much older brother and manager. You could probably call him his babysitter also. Elliott isn't in the movie that much, but he certainly makes an impact when he's there. Dave Chappelle also has a small but mighty role. Both characters help to fill in some of the gaps in Jackson's backstory, but I was glad to see that it didn't dive too deeply into his earlier life. A lot of things remain a mystery, but in the scheme of things it didn't really matter.

This is one of the better mainstream romance films in the last few years, and it still a great fit for both men and women. Obviously the romance is there, but it deals with its fair share of dark themes too. Jackson's struggles with alcohol are a key point of the movie and it makes a pretty genuine movie all that more real. I've been told that the earlier renditions of A Star is Born may have painted the women in a lesser light because they would do something in order to make the male's career deteriorate, but in this version Ally does all she can to help him, and his downfall can't be blamed on anyone but himself. Jackson is still a character we can sympathize with, even when he really isn't being a good person.

Some of my problems with this movie come in the final few minutes, but even if I don't know how I feel about the direction they ended up taking the sequences were still so well done. One of the best shots in the whole film take place when the film is hard to watch. Then of course, the film closes out with an amazing music performance. Each song in the film is well done, and I'm sure that the soundtrack will sell a lot of copies and get streamed a lot over the next month or so because these songs are great in their own right. I'm sure one of them will take how the best song Oscar whether its Shallow, Always Remember Us this Way or I'll Never Love Again.

I'll be checking out A Star is Born again. I don't know if it will be in the theater or not, but this is a very special film and I think everybody should go out and see it. I love when films like this are able to start a conversation. This is a film you'll be talking about at the water cooler the day after you see it. The film may have turned Lady Gaga into the type of megastar that we haven't seen in years and it certainly will put Bradley Cooper's next directorial effort on my radar as well. If this ended up sweeping all key Oscars it wouldn't bother me one bit.