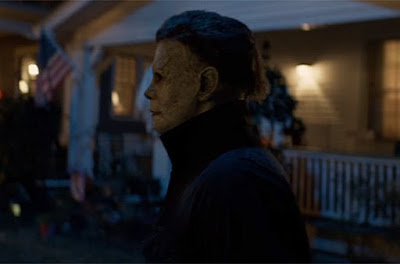 Halloween was my second most anticipated movie of the year. In some ways I don't really know why I became so hyped for this project, but my hype level went through the roof when I found out that John Carpenter would have at least a small part to play in this film that was going to erase all films besides the original classic from continuity. I don't really know how much of a part Carpenter had to play besides providing the music, but his blessing meant a lot of me since no film in the franchise had it since Halloween III: Season of the Witch.

Then when David Gordon Green signed on I became even more attentive. He wasn't exactly a horror director, but he's a more experienced talent than a Halloween sequel really deserved at this point. They were able to bring Laurie Strode back from the dead and bring Jamie Lee Curtis back once again. Even Danny McBride writing the script seemed like an interesting, but solid choice.

In many ways Halloween is almost like a remake of Halloween H20: 20 Years Later. Except this time its 40 years later. Titling the film Halloween is a bit of a weird decision, since its intended to be a direct sequel to the first movie, but Halloweeen II was taken (twice) and same with The Return of Michael Myers.

So 40 years have now passed since Michael Myers murder spree on Halloween in 1978. He has spent the last 40 years in captivity. Laurie Strode has never been able to escape the horror since surviving Michael's attack and has spent the last 40 years of her life preparing for him to return. Her dedication to killing Michael has cost her two marriages, the relationship with her daughter Karen (Judy Greer) and now her teenage granddaughter. When Michael breaks free during a transfer he puts Laurie in her family in the crosshairs and resumes his killings.

I was really impressed by David Gordon Green's effort here. He pays homage to the original Halloween on multiple occasions in very clever ways, but I felt like he was really able to make this film his own. The key components are still there since Carpenter came back to do the music and the film gets a nice update musically while also keeping the trademarks. With Green and co-writer Danny McBride's history in comedy I expected there to be some good jokes and it didn't let me down, but it never got too invasive either. There are just a few characters that are funny and when the film needs to be serious it has no problem doing so.

The camerawork probably isn't as simplistic as the original, there are some long takes that really work. I find that the film didn't really keep me on edge like the first one does, but it has strengths in other areas. The characters, most notably Laurie Strode, are the strongest in the franchise and I would say that Curtis' performance make this new version of Laurie Strode the definitive version of the character. She was compared to Sarah Conner in the trailers and I think that comment would be correct. She's a lot more badass this time around although it came at the expense of her relationship with her family. Judy Greer plays Laurie's daughter and its one of the first times I felt like she was used effectively. She's always been an actress I've liked, but its rare that she ever gets to do anything. Newcomer Andi Matichak plays the more traditional "Laurie Strode" type scream queen role and she does it well. Even the characters who end up getting slaughtered by Myers have some good moments. There is a little black kid that would've stolen the movie if he had more screen time.

Michael Myers himself is well portrayed. The duty was split between original Michael Myers Nick Castle and another actor. Some of Myers kills in this entry are some of the best I've seen in the series. Myers' motivations are often questioned, but there isn't any effort made to make him a empathetic character like Rob Zombie's film is. He's vague once again and that's the way it should be.

I'm sure that some will consider this to be pretty typical slasher movie fare. The reason I liked the film so much was because it was well delivered and I cared about the characters. There is a twist in the tail end of the movie that took things off the rails for a second, but I was surprised that it was able to rebound from that and offer a really strong ending.

Halloween is able to bring some life into a franchise that was originally believed to be dead. It seems that people were more than ready for this franchise to come back since its had a very good first two weekends at the box office. After two weeks its already the franchises best performer. I'm sure the success will mean that a sequel will be made. Apparently Danny McBride has already confirmed that development has already begun. I consider this sequel to be the second best after the original movie and I recommend checking it out in the theater if you're a fan of the series.