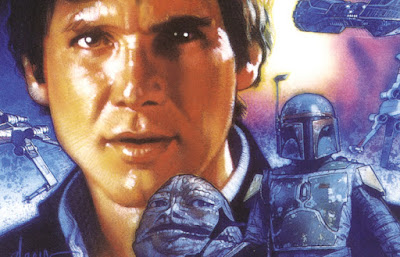 Its been a few months now, but I'm back with another EU review. The Hutt Gambit is the second book of A.C. Crispin's Han Solo trilogy following The Paradise Snare. It continues to chronicle the life of a young Han Solo in the years before A New Hope.

I was a bit shocked where this book began. There is a large 4-5 year jump between books and when the novel begins Han Solo has already been kicked out of the Empire for saving Chewbacca and Chewie has already sworn Han a life debt. We don't actually get to experience this movie in real time. Han just reflects about it in the opening pages of the book. There isn't really a lot of development between the two smugglers, they are just fast friends that do everything together. Since we got the evolution of their relationship in Solo I don't mind seeing another direction for their relationship.

Its this book where Han really starts to develop into a smuggler, rather than just a pilot. He's fresh off the humiliation of his dismissal from the Empire. He's also still feeling the effects of what he did at the end of The Paradise Snare as bounty hunters are constantly trying to track him down. The book has a bit of a shift in genre, but it still fits as a direct sequel to the earlier book some of the characters that we were introduced to in the last novel stick around for this one too.

The dynamic between the Hutts gets a lot of great development and there are several times where the book is told from their perspective. They take up more of the story than I expected, but I dug it because it really gives the story a gangster feel in a Star Wars setting. In some ways this is a bit of an origin story for Jabba, but we also learn that he's not the only Hutt out there and these Hutt clans may not get along that well. The villains from the last book also have a small part to play in Han's story this time as well as well as his former girlfriend Bria, who seems to be a key part in the start of the Rebel Alliance.

Its in this book that Han gets introduced to Lando Calrissian for the first time. I will admit that I like their meeting in this book more than I like the direction they went in Solo. Crispin just made a really cool choice. While the rivalry between the two men remains they feel more like friends than they did in Solo.

The book wraps up with an all out war and it is the part where you start to notice Han Solo's capability as a leader. Its foreshadowing his eventual joining of the Rebellion although he may not quite be ready to sign up just yet. The ending wasn't exactly my favorite part of the book, maybe because space battles just don't seem to be as entertaining when you don't have the visual aspect. The book changed perspectives a lot during that time and I occasionally lost track. I find this to be a bit of an improvement over The Paradise Snare because it doesn't have that lull right before the ending. This series has been very entertaining at this point though and I'm sure I'll move on to the next story Rebel Dawn fairly soon.