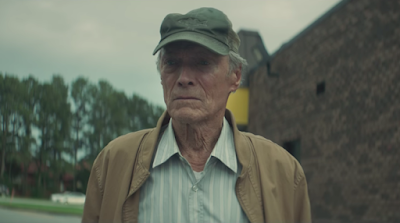 It was fitting that I wrapped up 2018 with a Clint Eastwood movie. It was one of my goals of this year to watch more of his films I would say I succeeded. So, my final theater watch of 2018 ended up being The Mule. Clint's first acting since 6 years ago in Trouble with the Curve. He directs the film as well.

Although he's been insisting that he is far from done I'd wouldn't be surprised if this is the final time we see Clint Eastwood act. He takes a long break between acting jobs now and focuses mostly on directing. If this is the end of the line for Clint then it proves to be a very good farewell to an acting titan.

The Mule is loosely based on a true story of a 90 year old man who is used to drive drugs across America by the cartel. The name of the main character is changed and I don't know how much of what is depicted in the film is true, but I'd imagine its kept to a minimum. The character Earl Stone is certainly in Eastwood's wheelhouse. He's playing another hard working old man who is distant from his family. This time his daughter in the film is played by his real daughter Allison.

Earl is offered a chance to transport drugs over the state lines when the cartel hopes to find responsible drivers who can travel without being noticed by police. Earl's age makes him an easy target and he proves to be worthy at his relatively easy job to the point where he draws some eyes from the head of the cartel (Andy Garcia) as well as the DEA (Bradley Cooper and Michael Pena).

Some reviewers have labeled Earl Stone as a resurrection of Eastwood's Gran Torino character. A grumpy, old racist, but to me its far from that. Earl Stone is quite pleasant and likeable. He seems to be unintentionally racist, just from being out of touch. He actually has some cute interactions with minorities in the film and doesn't treat them any different than he would white folk. Of course, he has to do a bit of sounding off about the modern generation, but hey, that's what old men do.

Weirdly enough, The Mule felt like a bit of a feel good movie for me. Mostly because I found Eastwood's character to be so pleasant. Its surprisingly funny too. Bradley Cooper and Michael Pena are a bit underused, although Cooper makes some good cracks. Cooper and Eastwood share some nice little moments together. They already worked together a few years ago in American Sniper. Dianne Weist makes her first appearance in 3 years as Eastwood's estranged wife and the pair have some nice moments together.

If this is the final time we see Clint Eastwood act I'm pretty happy with the final product. Eastwood has certainly kept it close to chest and doesn't consider it a retirement film, but all know from Unforgiven that he likes to go out on a high note. I'm not saying that The Mule is as good as Unforgiven, but there were plenty of hints that it was his final ride as a cowboy. If this does end up being his last acting performance I'd still expect to see a few more Clint Eastwood movies behind the camera. He's still one of the most efficient directors out there. Remember he already released The 15:17 to Paris earlier in 2018.

Its nice to see that Clint can still please theatergoers and it appears that The Mule will have a solid box office haul by the end of its run.