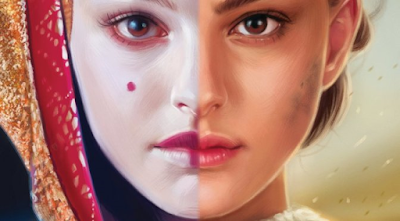 Padme Amidala is one of the characters that has been a bit short changed because of her involvement with the prequels. Ever since new canon started most of the material focuses on classic era Star Wars, but it looks like the prequel revival is beginning in 2019 with Queens Shadow and Master and Apprentice. Padme did get some moments to shine in Thrawn Alliances but now she's getting a full novel to herself, a move that has been welcomed by fans.

Queens Shadow takes place in the roughly ten year gap between The Phantom Menace and Attack of the Clones. At the beginning of the book Padme Amidala's reign as Queen has ended and she is quickly asked to become a senator in the Republic. The transition doesn't prove to be as smooth as expected as she struggles to gain respect from her peers. Her effort to get Chancellor Valorum removed from office during her first time in the senate is a tough hurdle to get over.

I'm not sure exactly how long the timeline is in the book. Its definitely taking place over several months, maybe even a year. I see it as more of a character study. Its divided into 5 parts and each sections sort of focuses on its own story. Some plot points carry over the whole narrative, but its not really a very action packed book since it does take place over a relatively peaceful time in the galaxy. It really hits home the fact that Padme is a overwhelmingly good person, who simply just hopes to help people with no thought of what she'd get back in return.

The Star Wars canon novels haven't been too afraid to address politics in the galaxy. Bloodline laid a lot of groundwork for the sequel trilogy era and Queens Shadow gave me a bit of an idea on how the Republic worked during the prequel era. Bail Organa and Mon Mothma have reasonably sized roles in the story as well, as Padme's alliance with them help her to gain some creditability as a senator. Since Palpatine is the Chancellor at this time and he has a bit of alliance with Padme because they are from the same homeworld he has a small role to play along with a few other well known characters.

Padme's handmaidens get a bit of spotlight as well. Its a book full of strong female characters. Her "right hand woman" Sabe is the standout of her allies. She has already spent several years being loyal to Padme while she was Queen and now that she is given her chance to start her own life she's not really sure how to start. Padme's personal life gets some exploration as well. Its almost tough to think that a girl who was a Queen in her teens would really ever have parents, but she does.

This book didn't really knock my socks off, but I do think it gave some much needed insight into who Padme is as a character. I don't think she's really gotten the respect she deserves up to this point and Queens Shadow makes an effort to set things right.