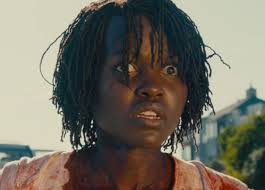 Jordan Peele has used his massive success after Get Out to really start his own empire of projects and I'll probably continue to support them until I'm disappointed by something he puts his name on. He's already used his success to jump start some projects that he wants to make. I also can't wait for his new reboot of The Twilight Zone that hits at the start of next month. I've been watching his miniseries on Lorena Bobbit and his Youtube original series Weird City. I've been more hyped for his follow up Us than I am for Tarantino's upcoming movie Once Upon a Time in Hollywood and Scorsese's The Irishman. This was the movie that could prove Get Out was a fluke and Peele deserves to be among the A-list directors.

I'm sure Peele had options to go bigger with his next project, but instead he decided to keep it in the horror realm with another relatively modest budget. I also have to credit the marketing campaign. I only ever saw the first trailer, because I was afraid of spoilers, but any ads I saw seemed to show most of the footage from early in the movie and it kept most of the reveals of the film to those who decided to go and see it.

So, the plot of the film is pretty simple in theory. A family of four on vacation at their summer home are terrorized, by mysterious and violent doubles of themselves. One thing that I think you should know going into this movie is that it sort of abandons the logic of its story in order to get its point across. I think its subject matter may actually be more heavy than Get Out, but I think deciphering it will take a bit more work. However, I do know that it sticks with you. I haven't been able to get it off my mind since I saw it.

Peele really aces the tone once again. The film is tense, but there is more than enough humor. The father of the family, played by Winston Duke is relied on for a lot of the humor, much like Lil' Rel Howery was in Get Out, but he never really ever feels like he doesn't belong. He's filled to the brim with great dad jokes, and he gives Lupita Nyong'o the room to give an excellent performance. Another thing that I appreciated about Duke was that he is hurt quite early in the film, and his injury doesn't magically go away. He hobbles through the whole movie. Nyong'o plays the film's most important character(s) and while the two characters are supposed to be the same person the approach for each one is very different. The script requires her to do the heavy lifting and she succeeds. I think she was good to the point where an Oscar nomination could be a possibility. The two kids, who were both completely unfamiliar to me do some excellent work too. Peele does take a while to get the plot going so he can introduce the characters, and I felt like I cared about them before things started to get weird.

One of the things that was a little disappointed by was that I wasn't that horrified by the film, there were a few good jump scares, but nothing that really took my breath away. Although, Peele's far more ambitious with his story than he was with Get Out. That movie got his foot in the door and now he's going to say what he wants to say.

I think Us is a film that is worthy of at least a second viewing. Its hard to talk about without risking spoilers. Get Out wasn't nearly as heavy and I still felt like I got more out of it the second time. I think this movie is going to be a massive success, and I'm looking forward to talking about it with other people who saw it. It was just so thematically rich and there is really no correct way to perceive it. Now that Peele has earned an audience. I think he's decided to challenge them with Us.