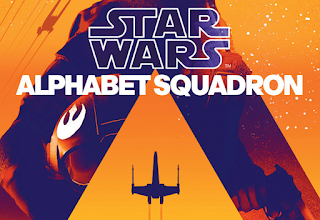 Alphabet Squadron is the first novel of a new trilogy of books. Its the third novel trilogy in new canon after Chuck Wendig's Aftermath series and Timothy Zahn's novels featuring Grand Admiral Thrawn (which has its third entry Thrawn Treason coming this month). Alexander Freed was tapped to write the first one, and I'm guessing he'll get the two following books as well, but I'm not sure its been confirmed at this point. This novel is also a part of a crossover with the Marvel comic series TIE Fighter which is already underway.

Freed has already had two writing jobs in Star Wars canon. He wrote the companion novel for the first Battlefront game, Battlefront: Twilight Company and he followed that up with writing the novelization of Rogue One. Freed is a good fit for writing gritty, working class characters and I realized quite quickly that he's a great fit for Alphabet Squadron.

The book takes place in the gap between Return of the Jedi and The Force Awakens. An era where I hope to see more of the cracks filled in. The story kicks off at the point where the Empire is on the verge of collapse, but the New Republic is still on pretty shaky ground as well. The transition from rebellion to functioning government isn't smooth. Many Imperials have defected, but some still cling to the final orders of the Emperor. Operation Cinder is a huge part of this book as the Empire has sort of admitted their defeat and has used their remaining followers to destroy their remaining resources and worlds rather than hand them over to the New Republic. Many sections of the Empire are still active, including a lethal TIE Fighter squadron called Shadow Wing.

Our protagonist, Yrica Quell is a former member of Shadow Wing, who chose to defect and when she is freed from a camp for fellow defectors she is chosen to lead a squadron that is tasked with taking down Shadow Wing. Quell struggles to abandon the beliefs of the Empire throughout the book. Even as the Alphabet Squadron team starts to form around her she stays remarkably distant from her teammates. Quell is not really a likeable character, she's given many chances to embrace her squadron, but doesn't, but I do find her point of view interesting.

I found that with Freed's writing the characters tend to be a bit underserved. It was the same way with Battlefront: Twilight Company. Outside of Quell I never really felt like I got to know these characters that well. There are enough characters that it even takes a long time before I could even figure out who was who. Most of the people in the squadron take the form of anti-hero types anyway. Sometimes I had to remind myself that this was just the first book in a trilogy, so there is still lots of room to develop characters. It could be because Aftermath built such a good group in its 3 stories, that I was expecting more from this group, which is essentially the anti-thesis of the Aftermath gang.

The book is definitely paced like its the start of a trilogy. The characters develop quite slowly, especially Quell. Who really clings to her Imperial methods and a reveal at the end makes that more clear. The book does take some unexpected turns from time to time, and things don't exactly start out smoothly for the crew.

I would say that Nath Tensent is probably the second best character in the book and he and Quell share some similar qualities. They are both former Imperials, but Nath is a few years removed from his time in the Empire. His whole crew was killed by Shadow Wing and he is driven to join the squadron in order to get revenge. In a lot of ways he reminds me of a Star Wars version of Benicio Del Toro's character from Sicario.

The only other character that really even seems to be worth mentioning from this book is Wyl Lark, who is the young pilot of the crew. He has a bit of a rivalry with another member of the crew Chass, because of a decision he made in a mission prior to joining Alphabet Squadron. Chass hoped to go out in a blaze of glory like her hero Jyn Erso, but Wyl robs her of that chance. At this point in the war Wyl wants nothing more than just being able to get home.

I've never been a fan of reading space battles in books. Its a type of spectacle that is really best served by film. So I found that when the squadron or other character were in battle I sometimes found it hard to visualize what was described in the book. That may not really be a fault of the book, but it kept me from enjoying it as much as I would have liked.

Alphabet Squadron is far less glamorous than other Star Wars novels and the characters still have a long way to go, but I must admit even though I found the book to be only okay (I like Freed's book Battlefront: Twilight Company) the ending had be interested in what is coming next with this series.